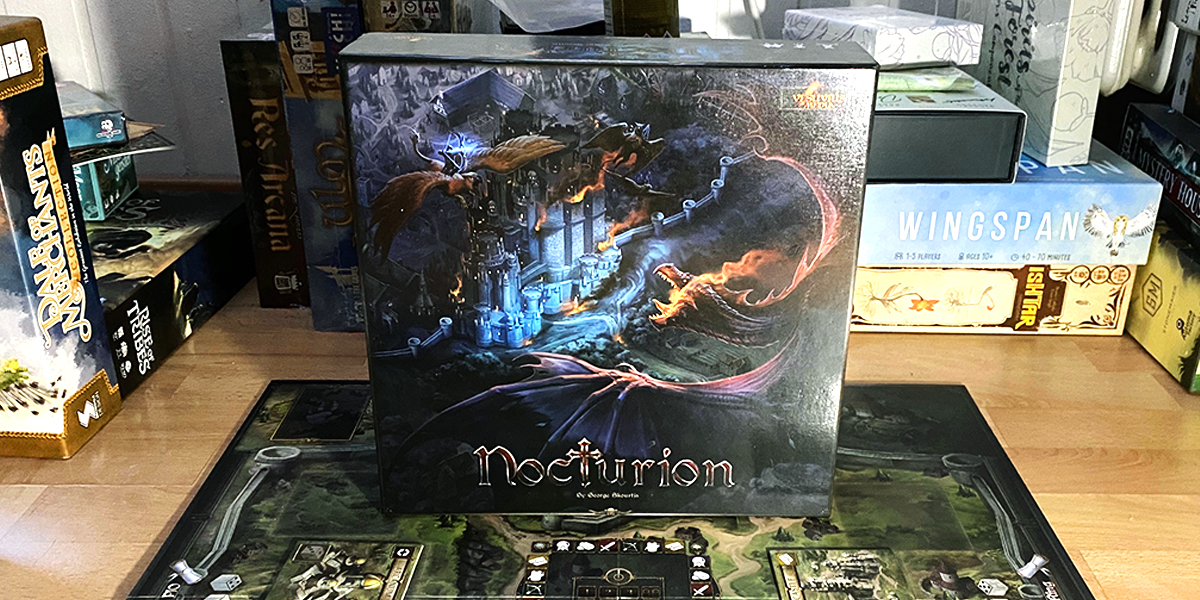 Nocturion, unlike its brothers, Zoar and the Dwar7s series, has a darker touch on the theme. Nevertheless, Vesuvius Media has once again brought another euro game to their bank. Anyway, this game is an ‘adaption’ of their MMORPG with the same title. While the browser game is targetting the mature audiences, the board game is enjoyable from age 14 and above.

Players will immerse in the realm where the Evergreen Empire has turned into ruins. Emperor Alexius IV has chosen the four Noble Houses of Evergreen to rebuild the empire from what’s left. Whoever can bring back the glory will be chosen as his Chief Advisor and Steward of Capital.

This game was released after their successful Kickstarter campaign. George Skourtis is the developer of this game. Let’s roll and delve into the fantasy realm of Nocturion.

This game overview is just to give you an illustration and will not be that detailed. To get to know the complete rule, please consult to Boardgamegeek’s file here. The game is divided into three phases: Acquisition, Action, and Refresh. After the set up is complete and all players receive their player boards, the game begins with the first player rolling the dice. The amount of dice depends on the number of players. Then, starting from the roller and clockwise, each will take one and the die will be their worker. This is the Acquisition phase. Each player cannot have more than two dice in their Treasury (player board). When it happens, then that last die will be converted to any resource of his/her chosen.

The Action phase begins and each player takes all of his/her chosen actions during his/her turn before passing to the next player clockwise. The player may reserve a die, equip the Noble House’s heirlooms, activate a location/ability, and go on a quest. A player can Equip heirlooms and go on a quest by paying a number of resources printed on the cards.

To activate a location, the player must place the die on the area he/she can activate. This is based on the number on the die. He/she then can harvest the resource on the tile and activate the ability printed. When harvesting resources, advance the Season marker. The other point will show which area will give 2x amount of resources while the other end will show which area will replenish its resources. When the Season marker makes a full round, the Year tracker is advanced. 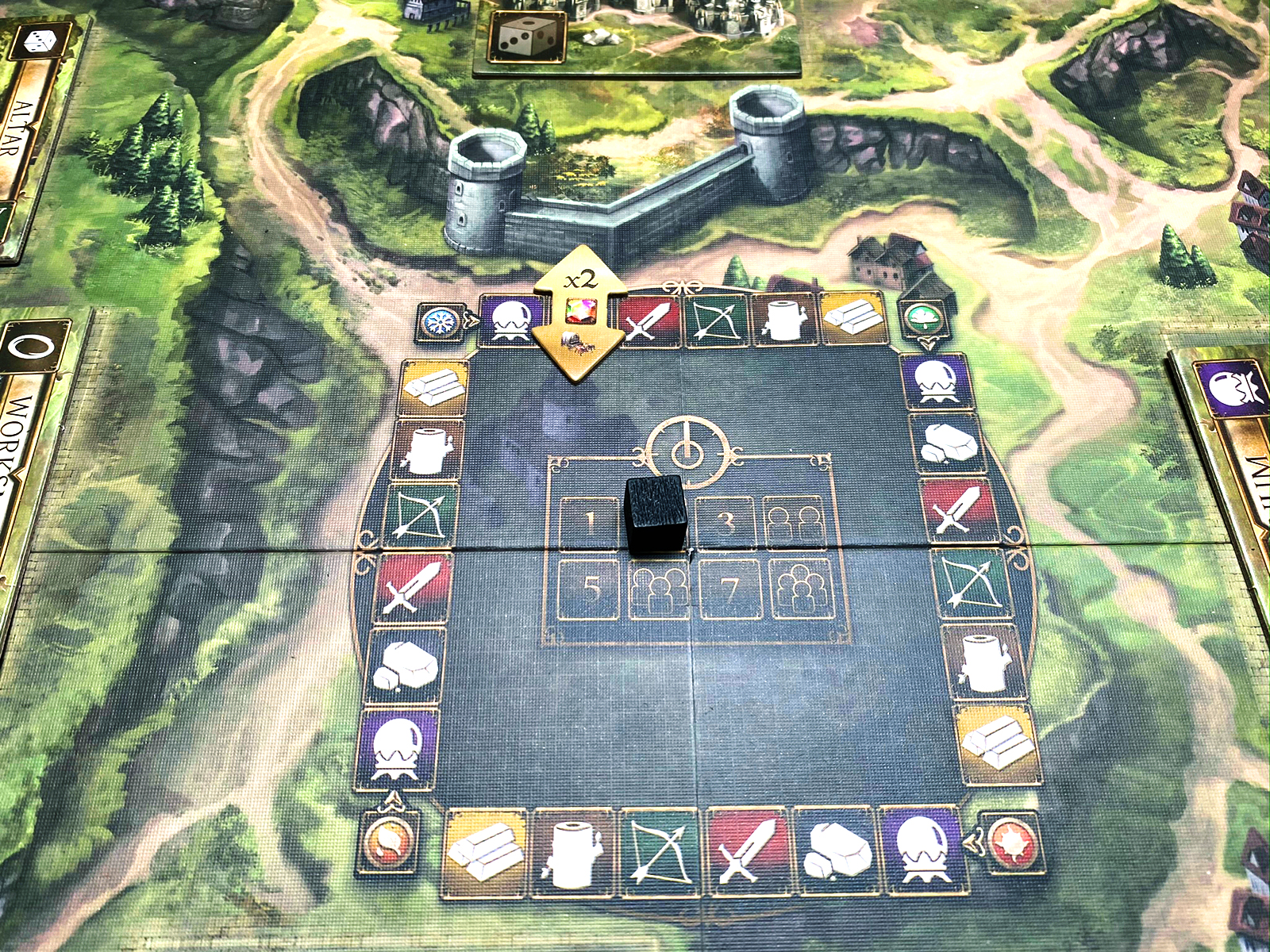 The season and year tracker. Look at that two-head-pointer marker? That will show you which ones will get replenished (bottom head) and which ones you will get double (upper head). 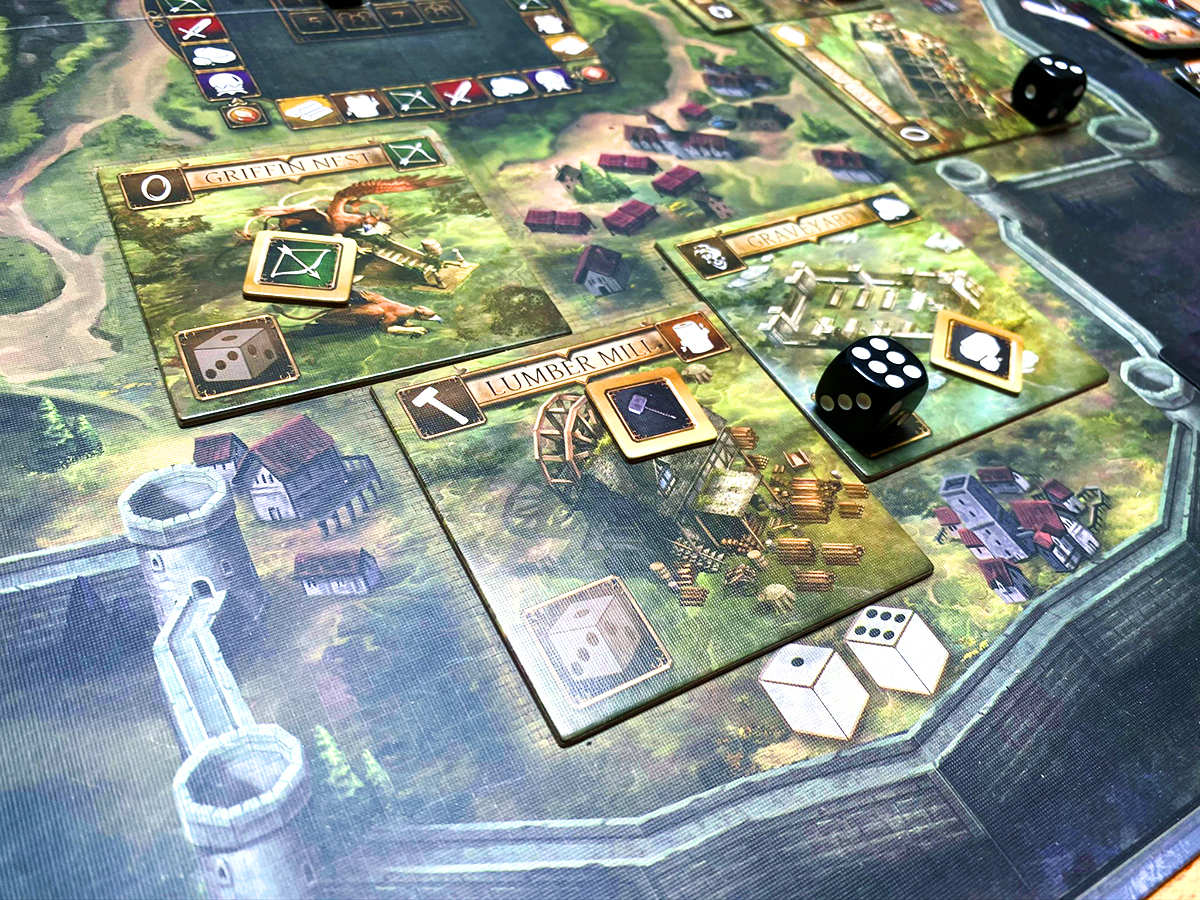 An example of the area. To activate lumber mill, griffin nest, or graveyard, you have to have a die with 1 or 6. On the top left shows the effect and top right shows the resource you harvest.

Some tiles reward players with Beasts, chalice, and the Guildmaster token that gives advantages. Some also enable players to cast a curse to their opponents. The heirlooms’ abilities and Beasts may be activated by putting Exhaust tokens on them. You can gather victory points from summoning Beasts, equipping heirlooms, and going on a quest.

The Refresh phase happens after the players finished taking their actions. All dice from the board are returned to the supply and each player has to discard resources until they only have six. All players then discard or draw Beast cards until they have 3. Chalice and Guildmaster tokens are returned to their initial spot and all Exhaust tokens on Beast. If the Year tracker has reached its end, then the Game end occurs.

Whoever gets the most victory points wins the game.

My personal view on Nocturion

First and foremost, I enjoyed my time playing Nocturion! This game is not that light because there are lots of things moving and it’s definitely not that heavy you will have a hard time to remember things that flow during the game, either. Nocturion is a medium-weight euro game with a fantasy theme.

After your first game, you will definitely have less downtime and Nocturion will be a smooth sail. I would suggest a game with 4 players to enjoy this game to the fullest. 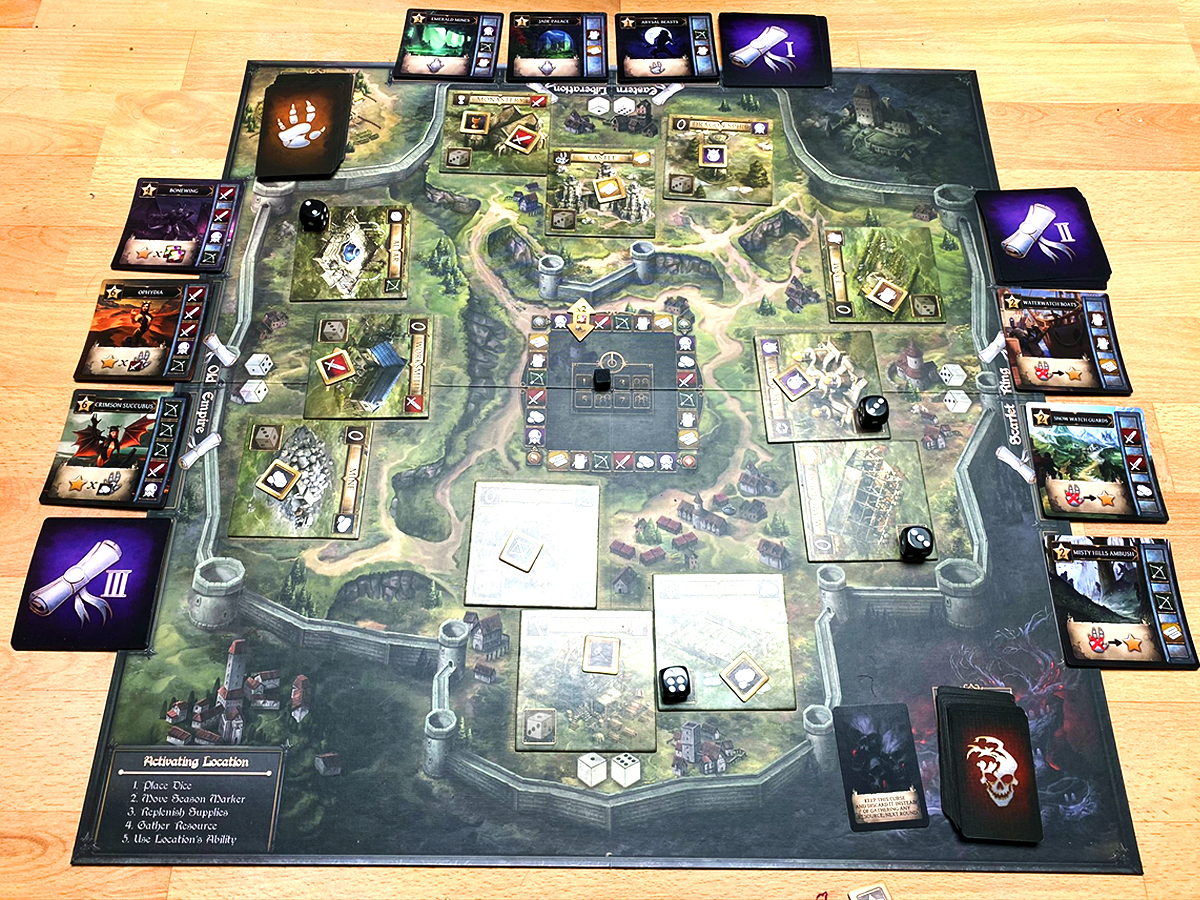 The board state after several turns.

The mechanic and the game flow

This game’s worker placement mechanic is supported by the additional dice drafting. The dice are going to be the workers we place throughout the area on the board to gain resources and effects. By gathering the resources, we are able to purchase upgrades in the form of the beasts and legendary heirlooms. It also helps us to finish the quests. All these things contribute not only victory points but also some additional skills to manipulate the dice.

The effect of certain areas on the board is not limited to only giving positive reinforcement to the player. We can also push bad impacts by placing the Curse card on other player’s board. This will hinder them to execute their game plan.

Nocturion is more a strategy rather than a tactical showdown kind of game. Sure it involves dice but we can pick which one we need and most importantly, we can save a die to be used in the next turn. The dice manipulation also helps you to devise your plan ahead.

In addition, I also love how Nocturion limits the resources player can gather to six. This means we should really use all of them wisely and we cannot be a hoarder as well.

This one is quite unique but it makes sense. While the other part of the marker lets you take twice as many resources, the other end shows you which area will get its resources replenished. That means, during a certain season, some resources will ‘grow’ and be ready for the players to harvest. Meanwhile, at that point as well, some will be overproduced and we are able to gather more of that type. This was done cleverly and I can get the logic behind it. However, this also means that some resources may go scarce and it gives another aspect the players need to think about. 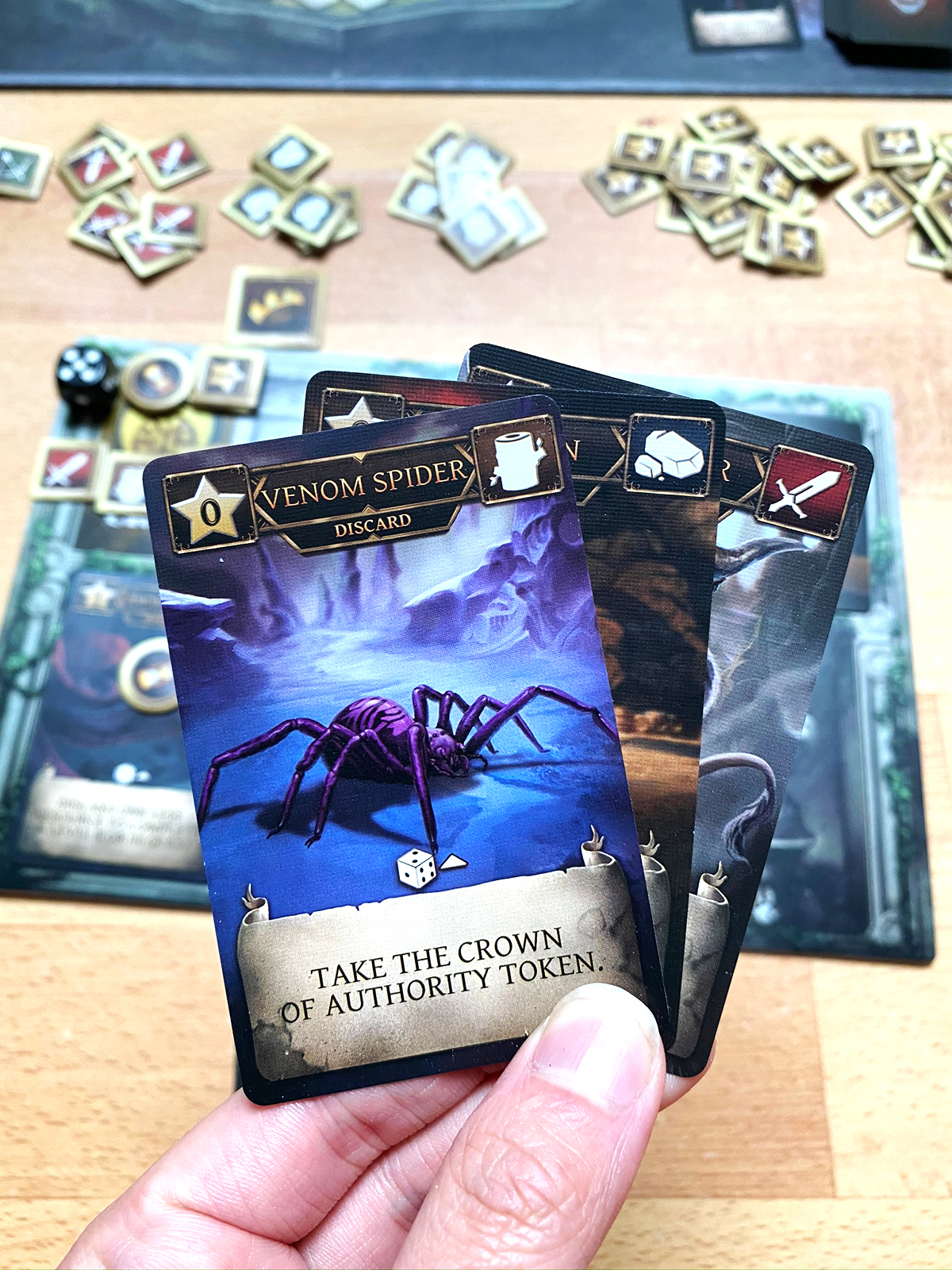 One example of the beast cards

After my first game, I realised that the Beast cards were quite important. During my second game, I tried to summon them as soon as possible. Not only because they contributed to my victory points, but they were also pretty useful to convert your dice when you need your worker to be somewhere else.

We can only handle four Beasts at a time (quite accurate, theme-wise, I like it). I recycled the Beasts I held in order to gain more points and when I got another stronger card in my hand. I also like how they ruled out to discard an exhausted Beast card in order to limit the activation of such skills. Thus, it is essential to know which Beast is not useful in a certain time/round.

About the heirlooms and quests

The quest level you can do depends on the number of heirlooms you have unlocked. This is the next plan you should have in mind if you want to step up the game. With more heirlooms, you can do harder quests and while doing so, gain some extra nice skill and extra dice! The level 3 quests are quite hard but also pretty rewarding. That extra dice are also quite nice to give you more options on the worker availability. 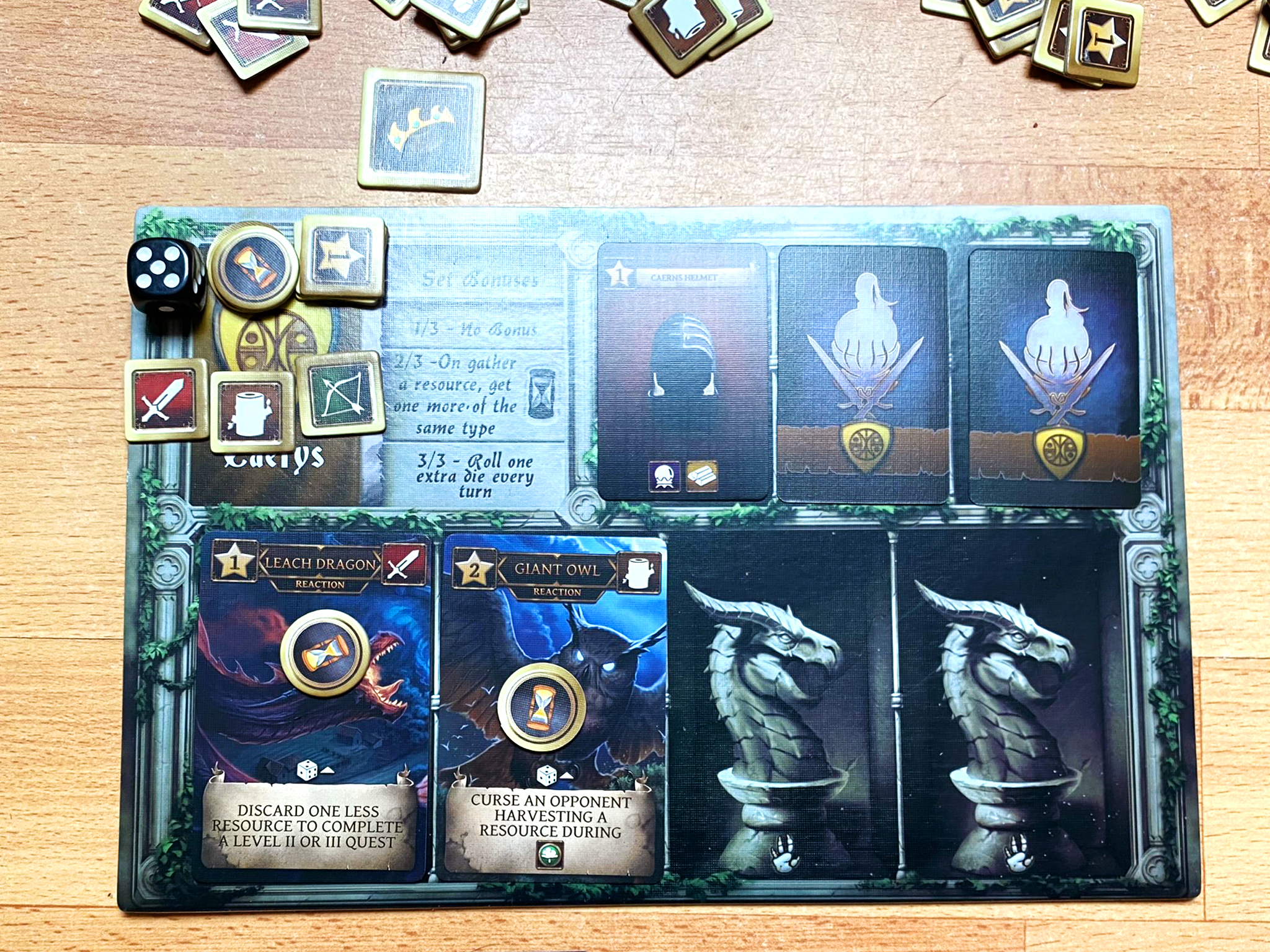 Heirlooms and beasts are really essential to step up your game in Nocturion. 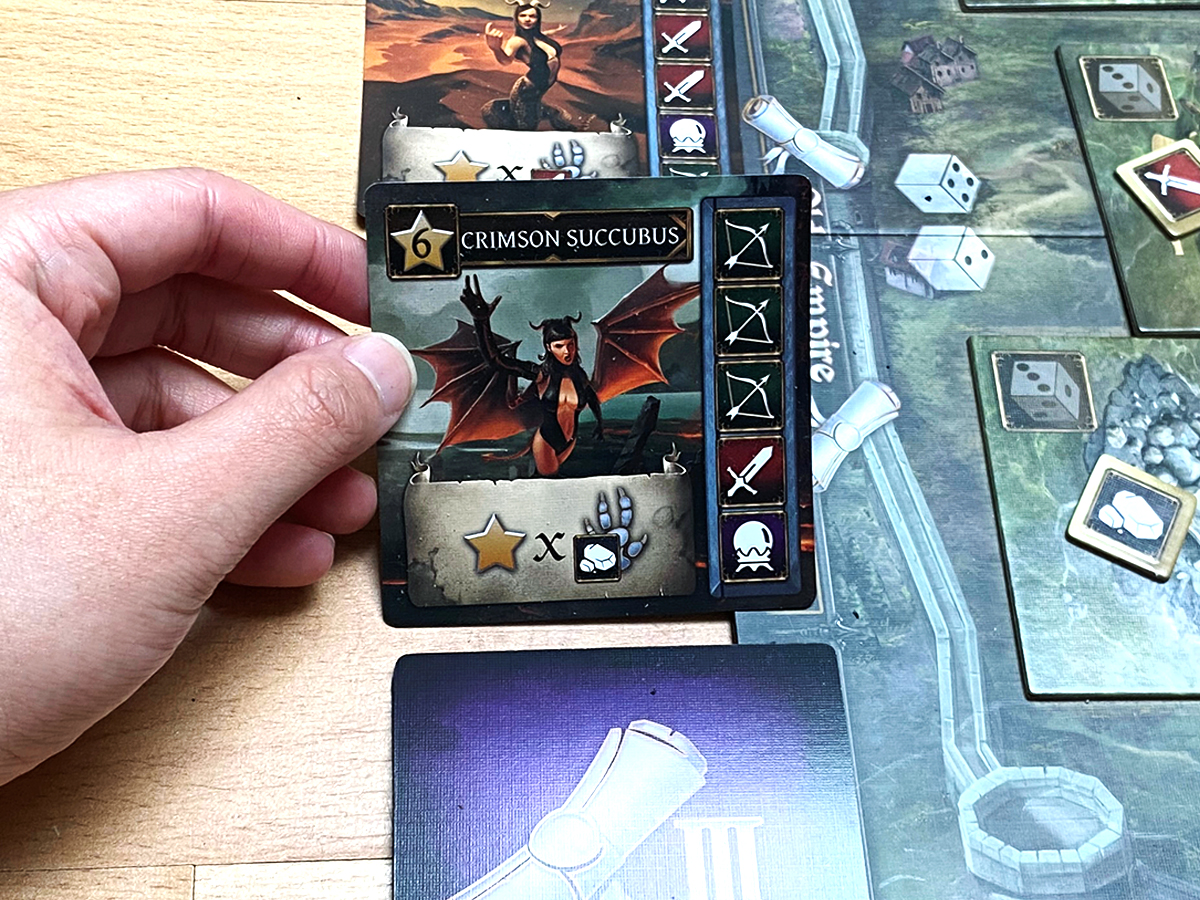 Quests give you victory points and bonuses.

The second skill from each noble house is pretty neat but I found the Zelar’s a bit overwhelming. To give the context, its ability enables the player to change the dice number to whatever he/she wants once a turn. Meanwhile, in terms of strength, the other houses’ ability is not as strong as this one.

My Nocturion is the retail version but I already find this one truly amazing. The board feels firm and robust enough even someone as clumsy as me will not tear it into two. The artworks may not be for everyone but it’s splendid. I can grasp the fantasy feel on all of them. Kudos, Damien Mammoliti!

Nocturion is a nice euro game that takes place in the fantasy realm. This is (for me) a medium weight game that will satisfy most players. There are enough depth and strategy contained in this one. I will not bring this to be a gateway for the newcomers or for those who want to step up to the euro, though. Should you buy this? Why not, it’s a decent one and it has great artwork, too! 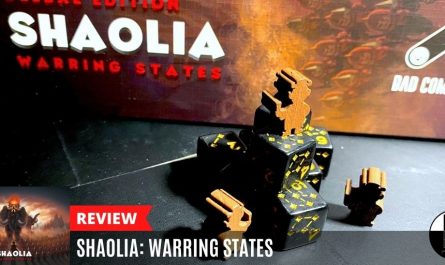 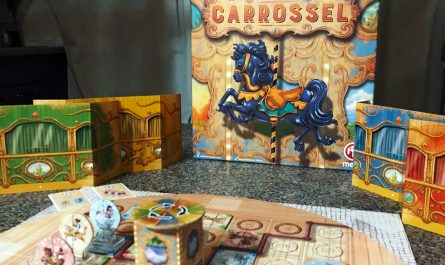