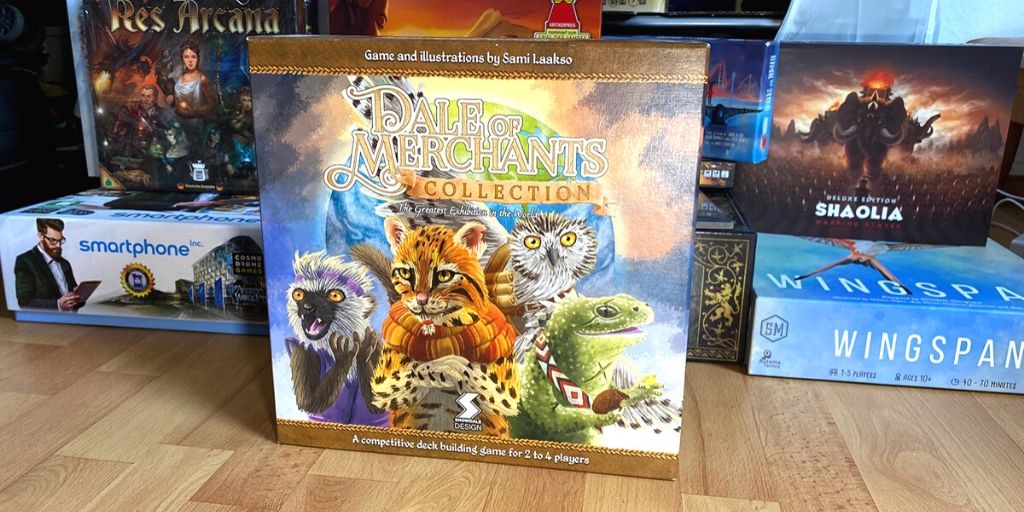 Imagine a world full of bipedal, animal-like beings. Your best friend is a shy armadillo – your favourite antique shop is owned by that friendly owl. How cool can it be? Well, fellas, this is a story about such a thing; I promise you it will have a happy ending.

Dale of Merchants is a dream come true for me. I got to know the first volume of the animalfolks’ series when I met Sami Laakso in his Snowdale Design’s booth; it was Spiel Essen 2017. They also brought the second sequel which I haven’t tried, sadly. From that point, I am a devoted fan! Anyway, this can be considered as another disclaimer in addition to the one below, stating that my review might be a bit biased here. Nevertheless, let’s roll and join my gaming experience as a merchant in this fable-goes-live game.

The universe of animalfolks is vast. Sami Laakso’s Dale of Merchants stretches from its first one to his future third volume. All of these can be later stored in this one big Collection box. You will also find another game taking place in this universe that will fit for the story-driven aficionados and campaign lovers, Dawn of Peacemakers. We will talk about this game next time, I swear.

In Dale of Merchants series, all players take the role of the animalfolk merchants who not only manage and trade their goods but also sharpen their new techniques. In this Collection release, we have additional character cards that give more variants in the gameplay. Don’t worry, it’s a stand-alone expansion, though! Back to business: the main aim is to be the first merchant who builds his/her stall completely. 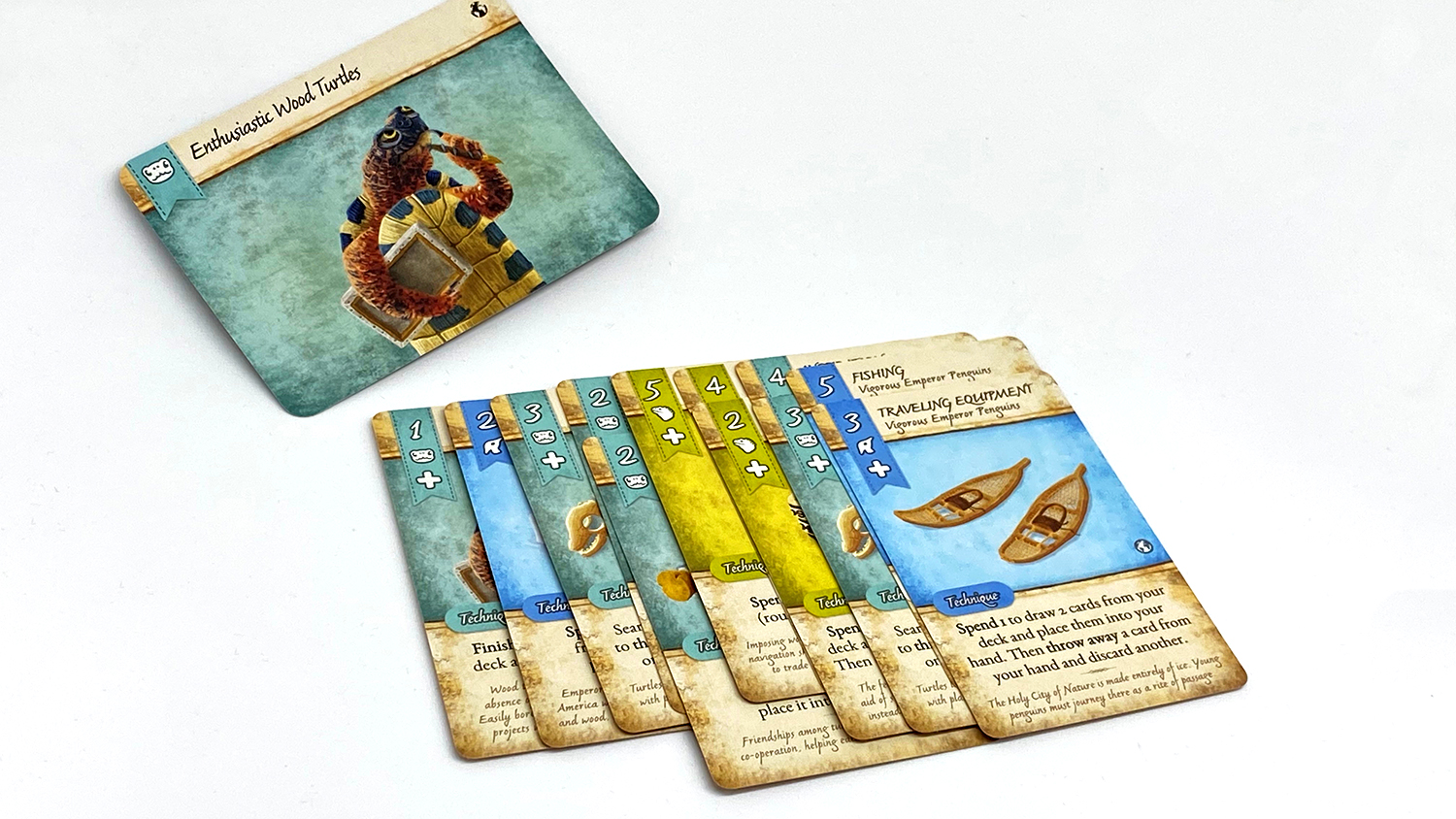 An example of a completely built stall stacks. Each stack is built by cards of the same colour. By the way, look at that turtle’s name! Prety funky.

To set up the game, distribute one card with value 1 from each animalfolk starting decks; give each player Junk cards so they all have ten cards. Then, shuffle these cards to build each deck. Draw 5 cards for each starting hand. The cards with value 2-5 from all decks are then shuffled to build the market deck; draw 5 cards and put them face up on each market board’s slot. The remaining Junk cards are placed face-up.

There are two phases in this game: Action and Clean-up phase. In the Action phase, players may perform one of the four actions. Market action lets you purchase a card from the market board by paying the card cost using the combination of any cards from your hand. Technique action allows you to play a Technique card; this may help you to win the game or to hinder the rival merchants. Stall action is when you build your stack; there will be 8 stacks in your stall to win the game. Inventory action gives you the chance to discard cards from your hand.

Afterwards, proceed to the Clean-up phase. You fill your hand back to 5 cards; slide cards on the market board and fill the empty slot. The game ends when someone has built his/her eighth stacks.

Other variants and possible customization

There are Trap cards and Character cards variants in this game. The Trap cards let you outwit your opponent by planting some tricks into his/her decks. Meanwhile, the Character cards are distributed during the setup and provide players with unique effects in the game. All series are customizable and can be mixed together for further gameplay.

For more details, please refer to the video explanation from Snowdale Design below.

Experiences with Dale of Merchants Collection

Big box, organised insert that fits everything, packed with many cards and tokens, one may get overwhelmed easily by the sight of Dale of Merchants Collection at first. This first impression vanished completely after your first session; Dale of Merchants is one of the enjoyable fast-paced games I have tried before; it can, however, become a back-and-forth, full strategy game, too. Curious, right?

Well, it’s easy to understand and still has a wide audience range, too – thanks to its depth and customizable feature as a deckbuilding game. Anyway, the game is comprised of several mechanics besides the mentioned above; you can find the set collection and card drafting here – also you can add the take that aspect with the deck you pick and form when initialising the game. 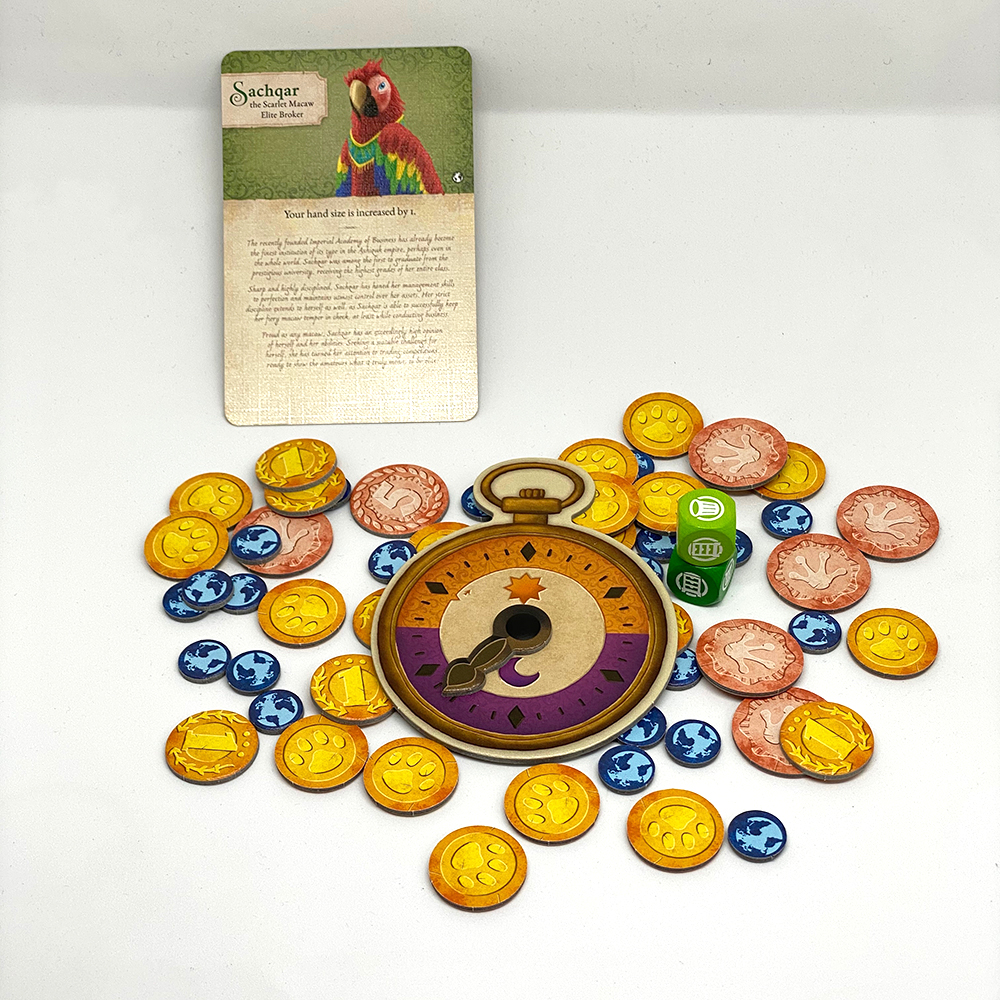 The tokens and other components are just fantastic.

As I mentioned before, the box is rather huge – it fits the title ‘Collection’. If we compare this box to the other series from Dale of Merchants, you’ll definitely spot the difference. The extra size is designed to accommodate other series from this IP. There are two Dale of Merchants games currently circulating in the market; with the third one recently got funded in Kickstarter as per this review is written, it is justified to have that stature to contain all of the cards.

Sami provided systematic storage for all of the components from this title that still offers a big, stand-alone expansion within.

Yes, he doesn’t only sell the big box – or a reprint of the core and expansions and then stuffs it inside one huge box – like some publishers out there. This one from him, I approved! I really like it.

Sami is the designer-slash-artist in this universe. With that in mind, I am not surprised that he can deliver the artwork that shoots this game to be even better. The animalfolks look great in Sami’s depiction of merchants in the world of beasts; it also adds another value to the gaming experience – making Dale of Merchants more welcoming for gamers of all ages. He named all of the animalfolks cleverly, too. It’s weird but in a very good way, like it makes the game cute. I love it and I think you will, too!

It’s not only the artwork (and of course the animalfolks’ universe) that’s neatly done, Sami has also created one great piece here, gameplay-wise. The game is easy but it has a great depth in it. Players need to manage on when to build the deck by purchasing cards from the market and when to build the stack to win the game. Many styles of play can be found here. I’d rather build my deck first and then build my stack later on, but it’s a pretty risky move there because I might not catch up with other players’ pace. Some would go back-and-forth from the deck- and stack-building to assert pressure, however, it does not guarantee a win either.

We have to manage which card we want to discard in order to build the stack, too. The card you use to build your stack will never come back to your hand. Thus, it’s not an easy decision to let go of some cards you have purchased, especially if they are your tools to manipulate the game even further. 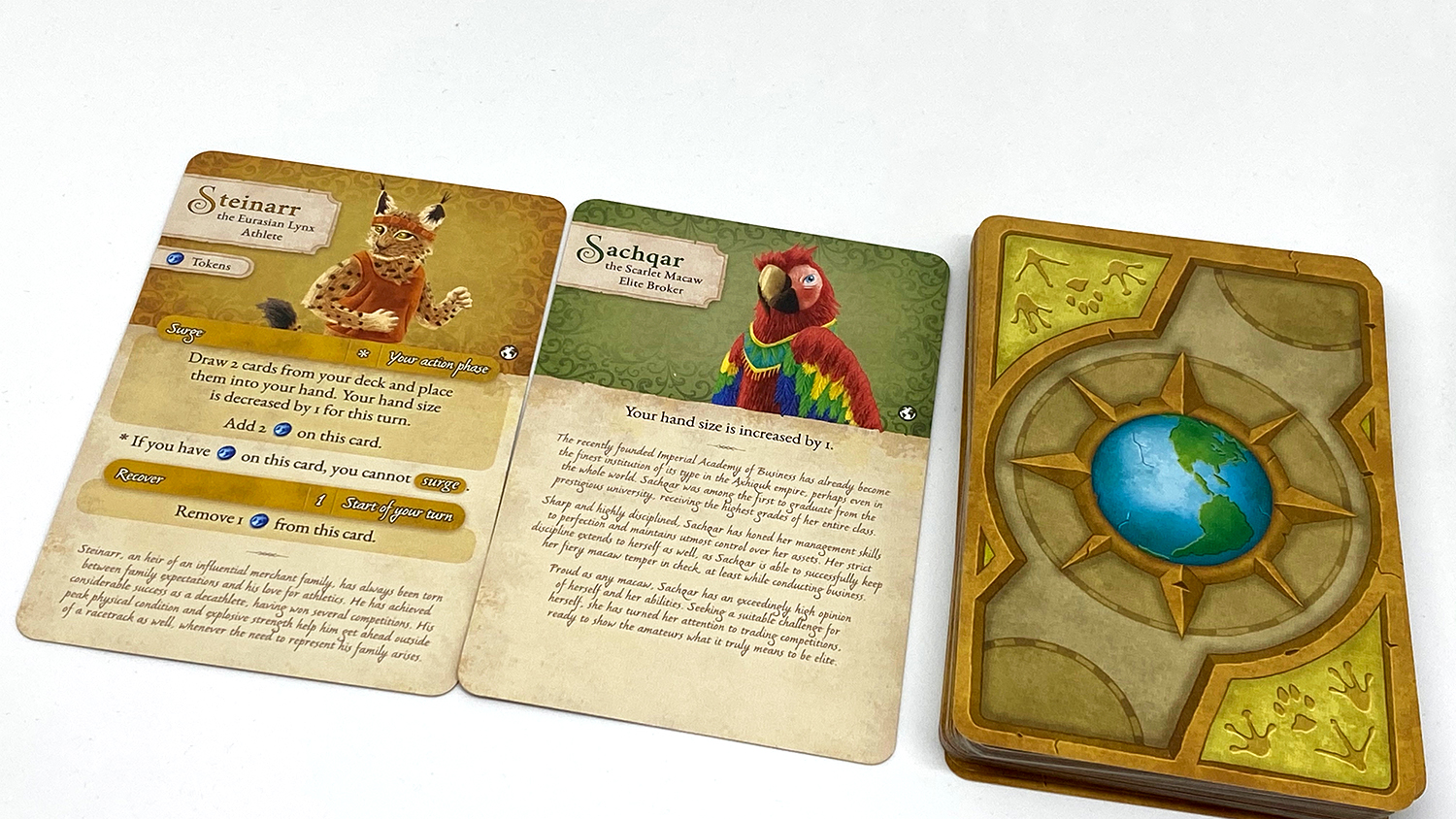 The animalfolks’ Character cards offer additional skills/effects that alter your play style. It varies from a simple additional hand size to some extra bonus with some efforts.

In addition, Dale of Merchants Collection has a lot of variations to choose. Snowdale Design even provides you with the deck selection tool to help you decide which cards you want to play with. How many players are there? Are you guys completely beginners here or do you own all decks? Do you want to play a Zen game or do you want to have an interactive play? A strategy game or just pure luck, no-brainer game. They even offer whether you want to bully your opponent or to keep the game as friendly as possible. How nice!

The animalfolks Character cards, if you choose to play with them, will dictate how the game will run in Dale of Merchants Collection. Some will enact a massive luck game that needs neither strategy nor tactic – it can be really random and chaotic. Meanwhile, others will push you to devise your plan carefully. That’s what I call a first-class aftersales service.

How about the replay value? 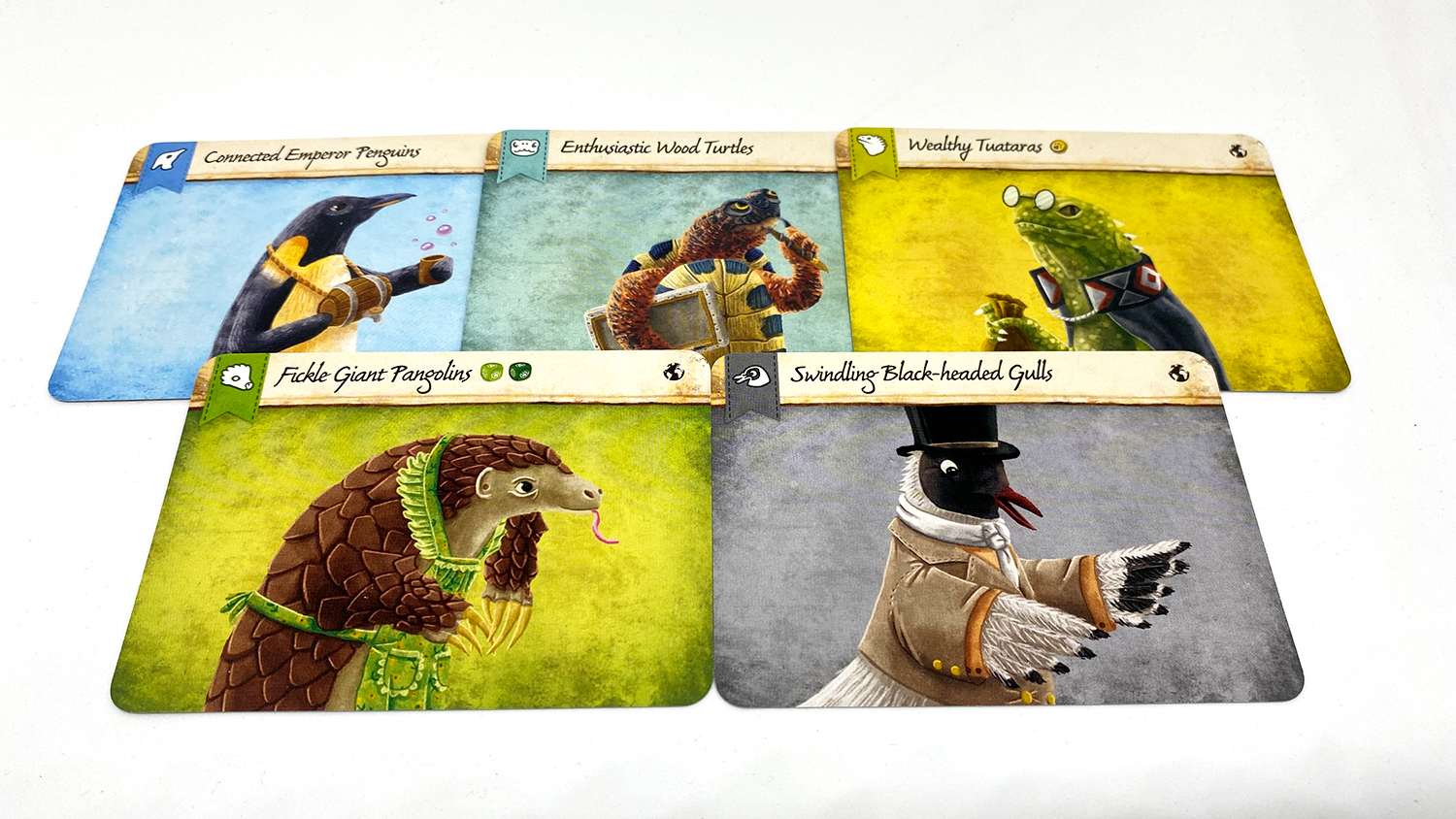 I tell you, these are not even half of the decks you can customise with! So, you don’t say!

Extremely high! I mean, I mentioned it several times already, too. First of all, you’ll find a lot of different deck combinations in Dale of Merchants Collection; each deck will have different pace and gaming style – those tally the replay value up even higher. Moreover, you have variants to a great extent as well; the two to four players with optional team play, for example.

Disarming artwork and well-designed storage and systematic insert are not the only pluses in Dale of Merchants Collection. The gameplay itself is brilliant. It ranges from an easy and beginner-friendly session to somewhat a complex, mind-grinding game. High replay value is guaranteed here. This game is, in my opinion, a must-have in everyone’s table. I am not aggrandising Sami and his IP at all; this game can be a sine qua non for you. 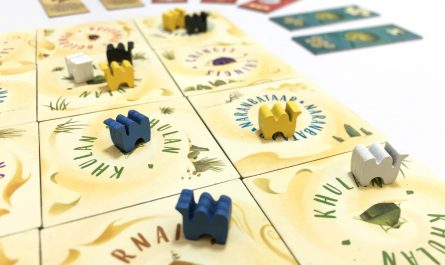 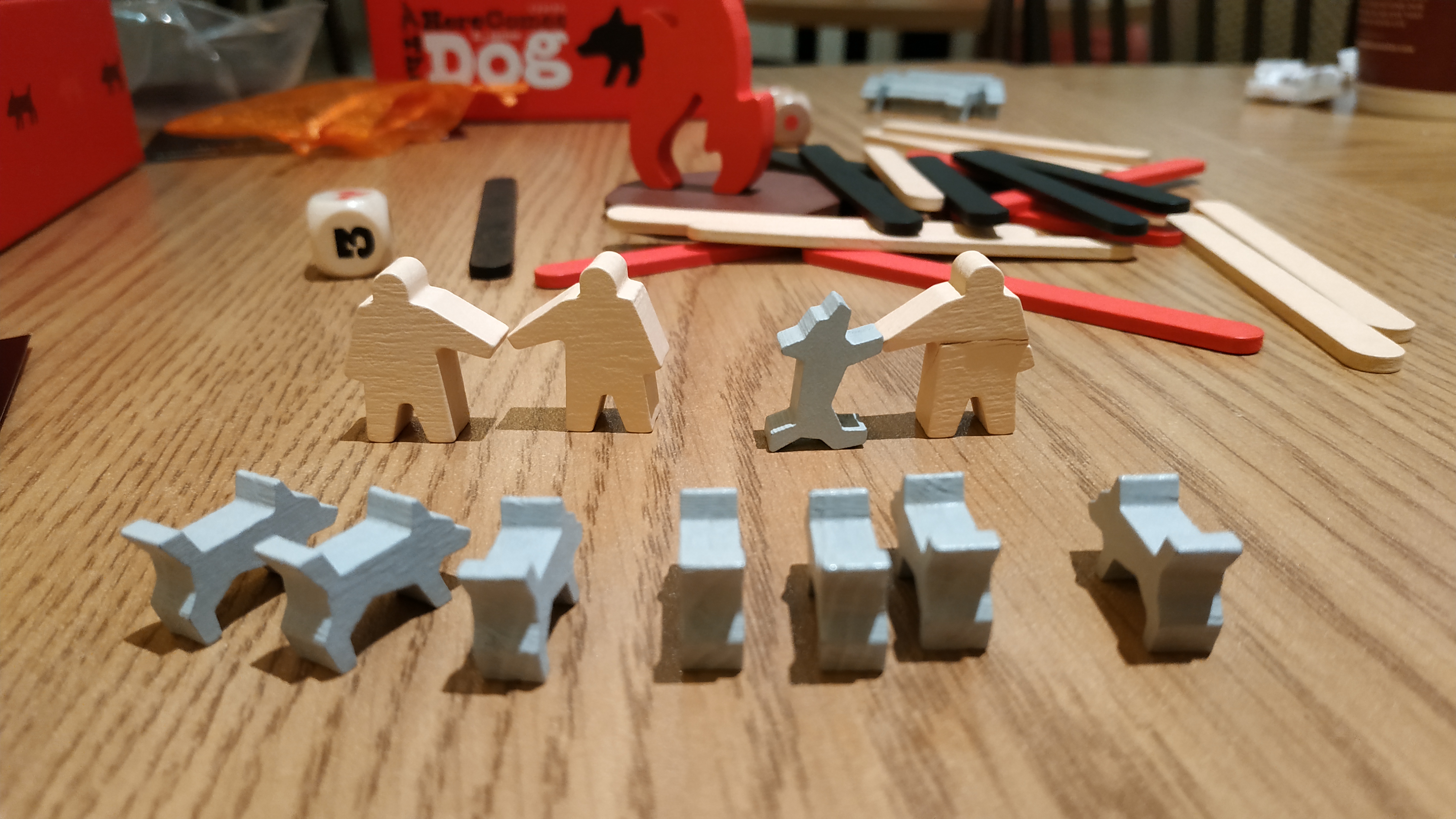