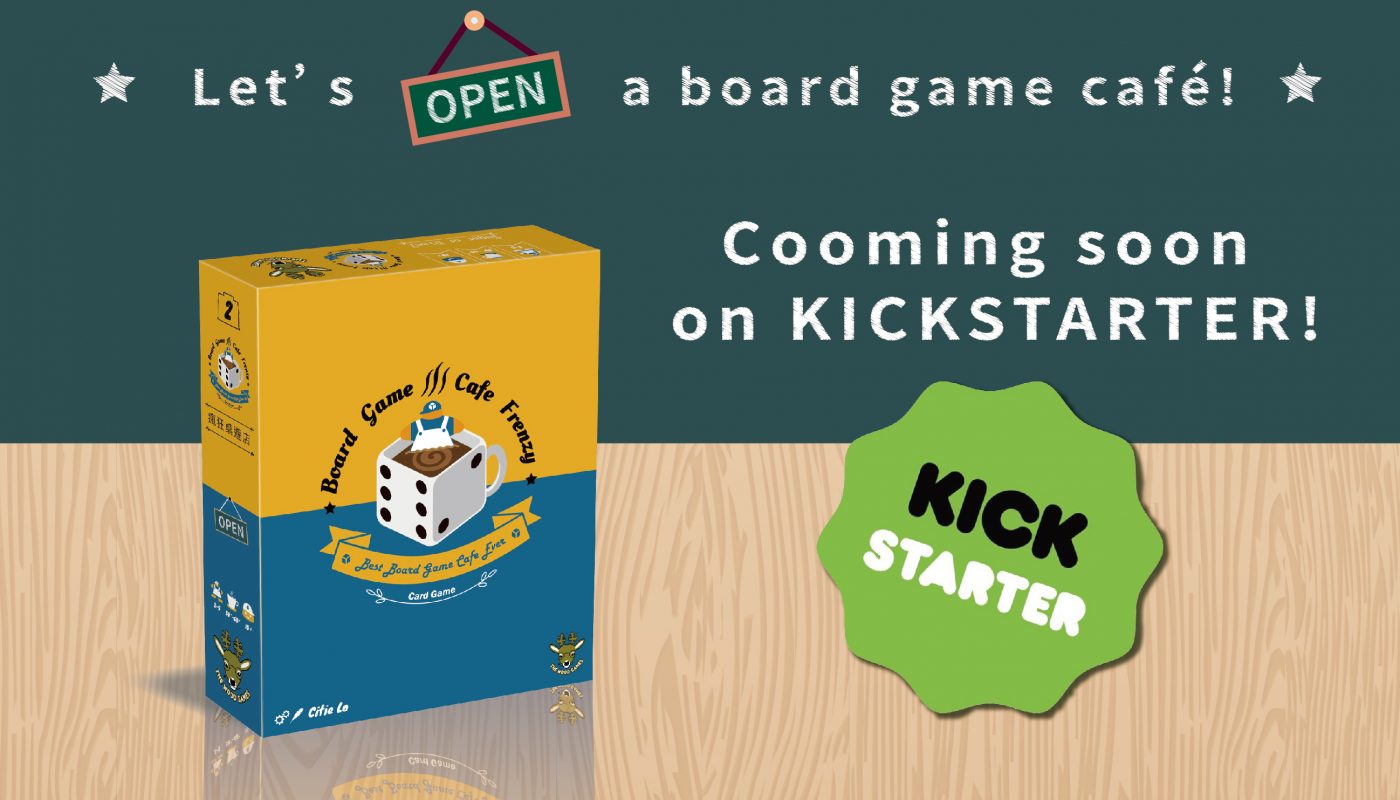 Board Game Cafe Frenzy is a board game designed by Citie Lo from The Wood Games. I saw this game in Berlin Brettspiel Con 2019’s preview and it looked simple yet alluring. Is this game simply good or pretty outstanding? Let’s check it out together.

Overview of the game

In Board Game Cafe Frenzy, all players are getting the role as entrepreneurs who want to open their own board game café. The game lasts for around 30-60 minutes and accommodates 2-5 players. However, there will be an AI playing with you if there are only two players in one session. The goal of the game is to get the most money at the end of the game. 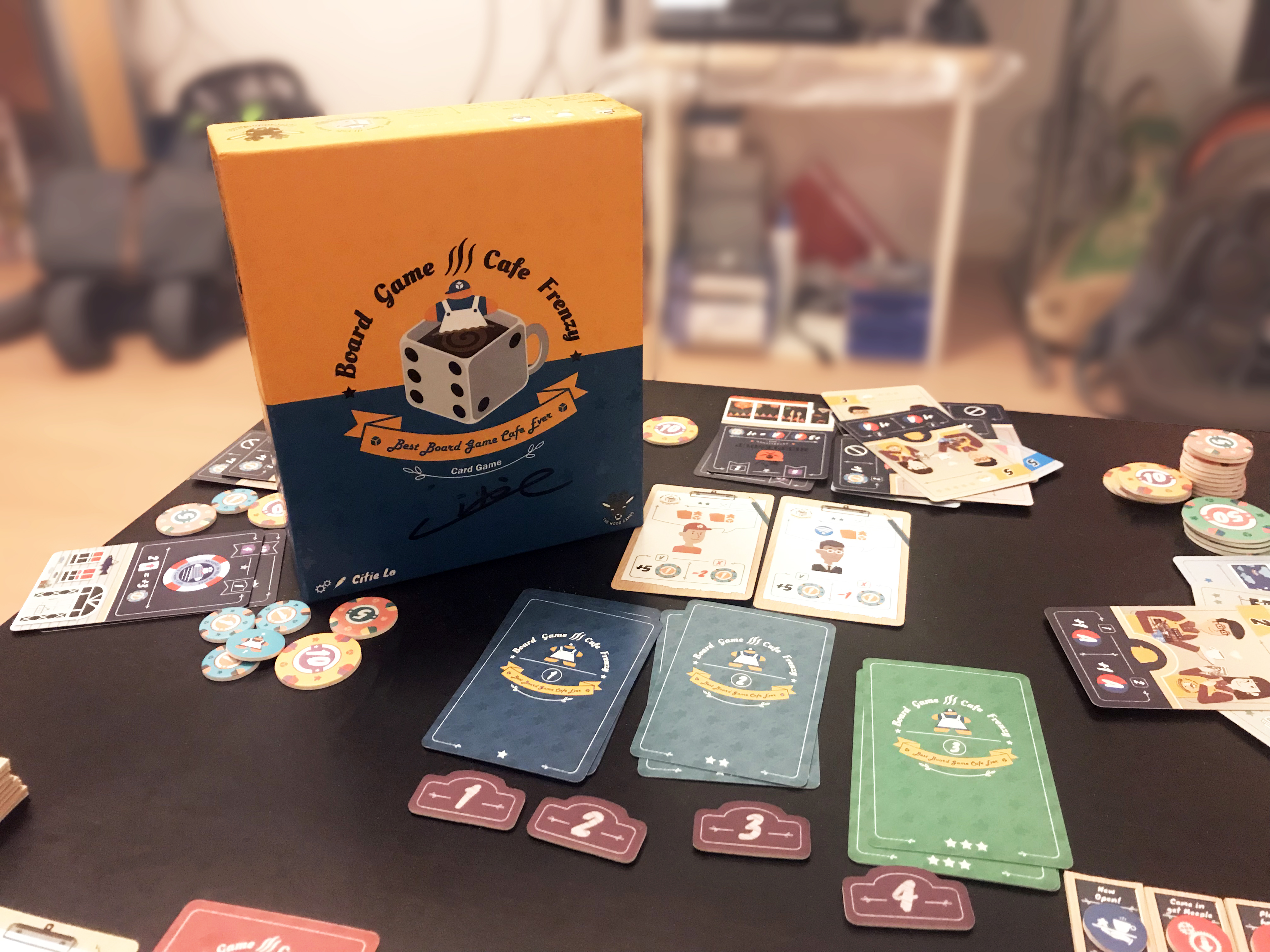 How to play Board Game Cafe Frenzy

Each player starts with a capacity card and a random store board. The capacity card is the maximum cards you can play during the Store opening phase. The turn order will start from the lowest to the highest number printed on the store board. Shuffle the three customer cards separately based on the level and reveal 2 cards from Level 2 to be the common customers. These customers have demands you need to fulfil to gain coins during the scoring. Shuffle the action tiles and reveal 3 of them.

There are two phases in Board Game Cafe Frenzy: the Preparation and the Store opening phase. The scoring in this game comes after each phase. Yes, we have to calculate scoring twice. 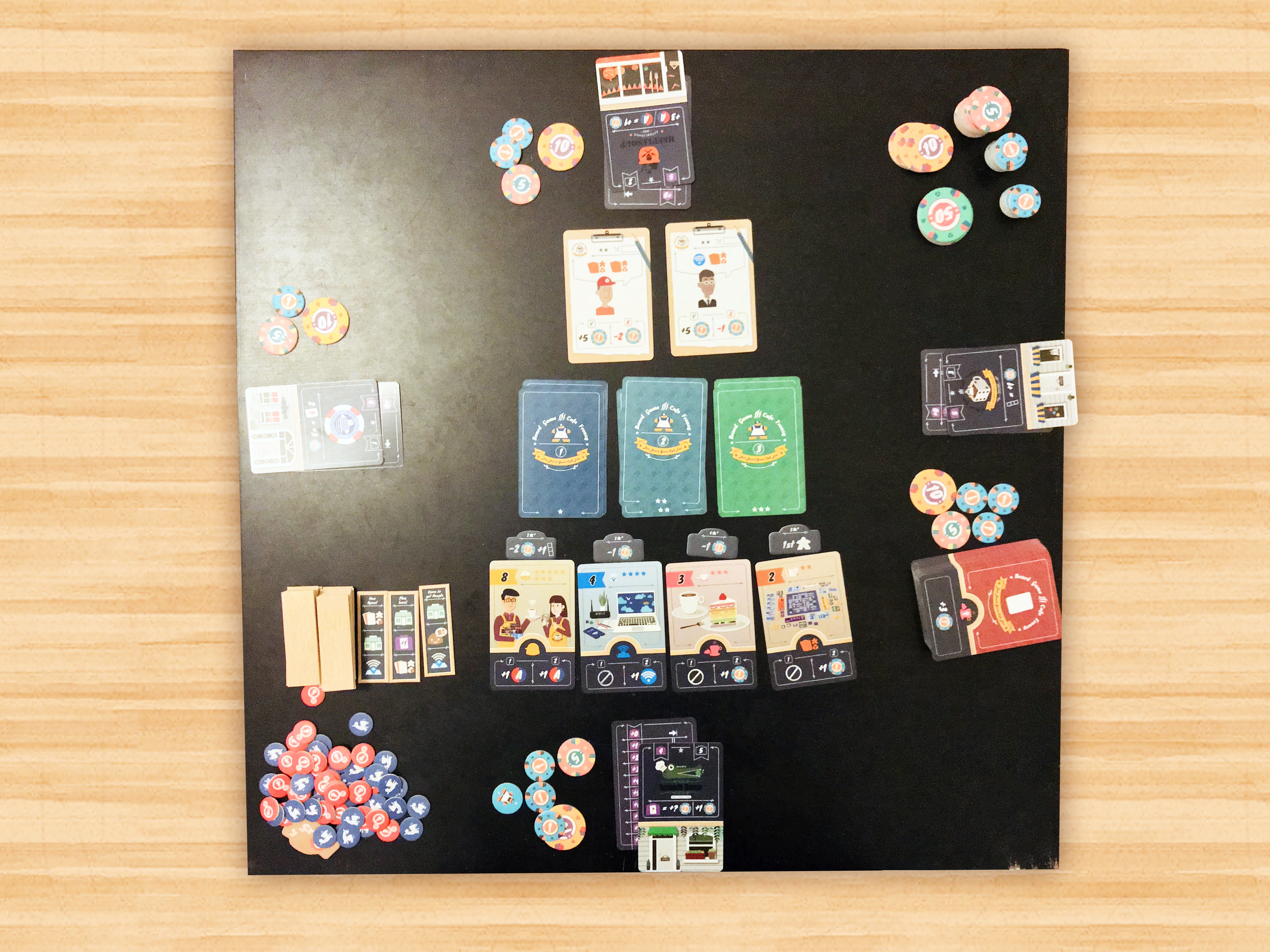 There are 10 rounds in the Preparation phase. At the beginning of the round, we will draw game cards equal to the player count. These cards are then sorted and put below the marketplace tokens; from -2 to the 0 value token gets the highest to the lowest card number.

Each player then draft cards to their hand by purchasing the available cards in turn order. The purchase is a must. Then, he/she receives the rewards printed on the Round 1 part of the card and the marketplace token. The next turn order is determined by marketplace token related to the taken cards, starting from right to the left.

The first scoring is done by calculating the Wi-fi cards and the paired cards each player has in his/her hand. This concludes the first phase; we need to flip the marketplace token now for the next phase. 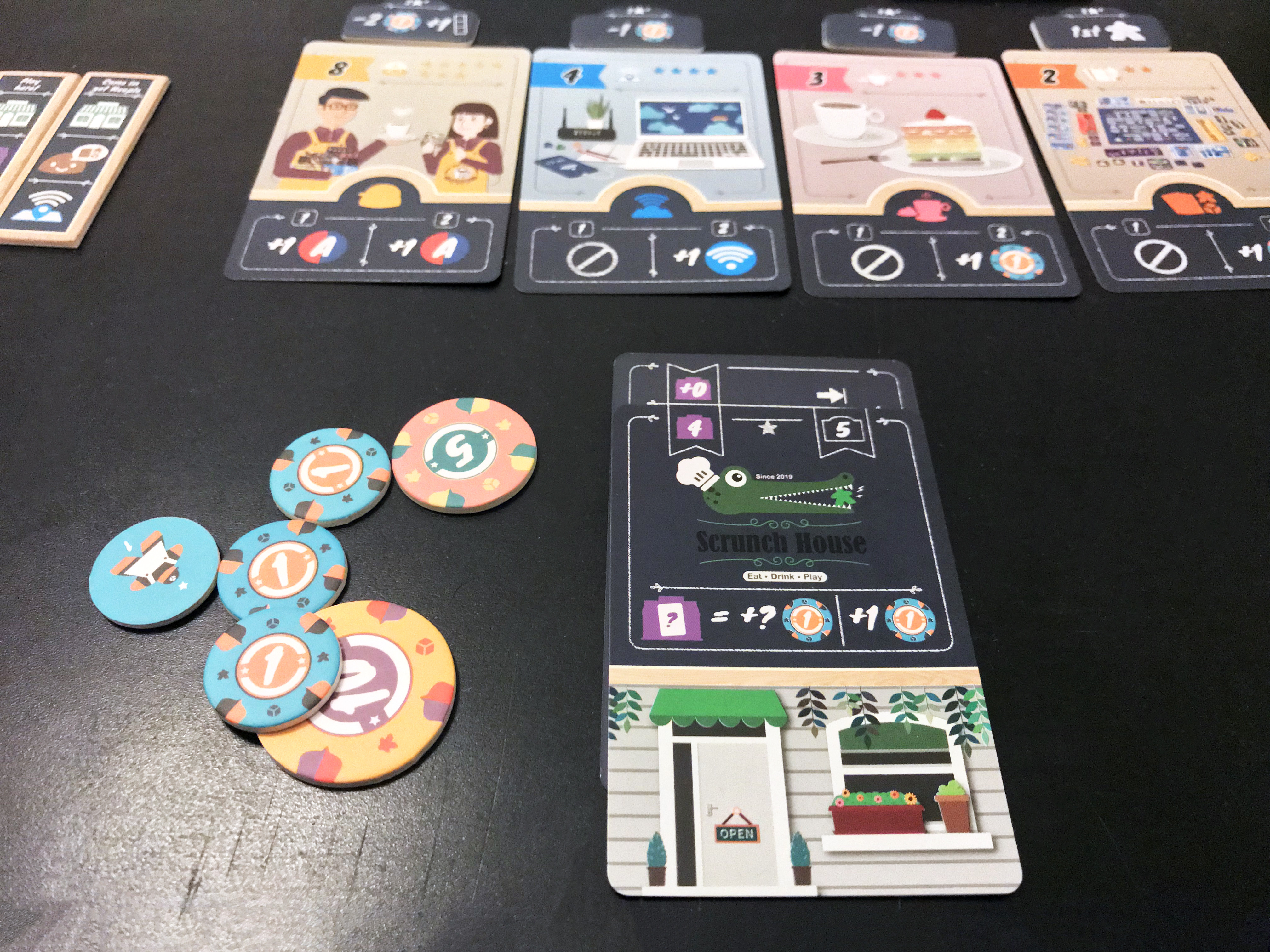 Store opening phase consists of 10 rounds, too. During the last phase, we draft the cards and now the time comes for the trick-taking game. In the first round, the game starts from the player who has the fewest to the most coins. In turn order, each player plays a card from his/her hand.

The turn for the next round starts from the player with the highest to the lowest card value. This is determined after the cards are played. Then, the first player and the rest take 2 cards and 1 card respectively. Although the last player would not get any card, he/she could take 2 action discs.

The cards are then placed to the Store area while also taking account the capacity; if the number of cards exceeds the capacity, discard one of the cards you have. Then, gain the reward printed on the card (Round 2).

If you have action discs, you can then put one to one of the free action tiles you have. You can then activate an ability or preserve icon; the latter is useful to fulfil customers’ demand by putting more icons to Wi-fi, board game, or meal icon. There are several types of abilities; mostly are upgrading your cards. Some of them let you increase your area capacity, taking new customer cards, and more direct awards like coins and action tile. 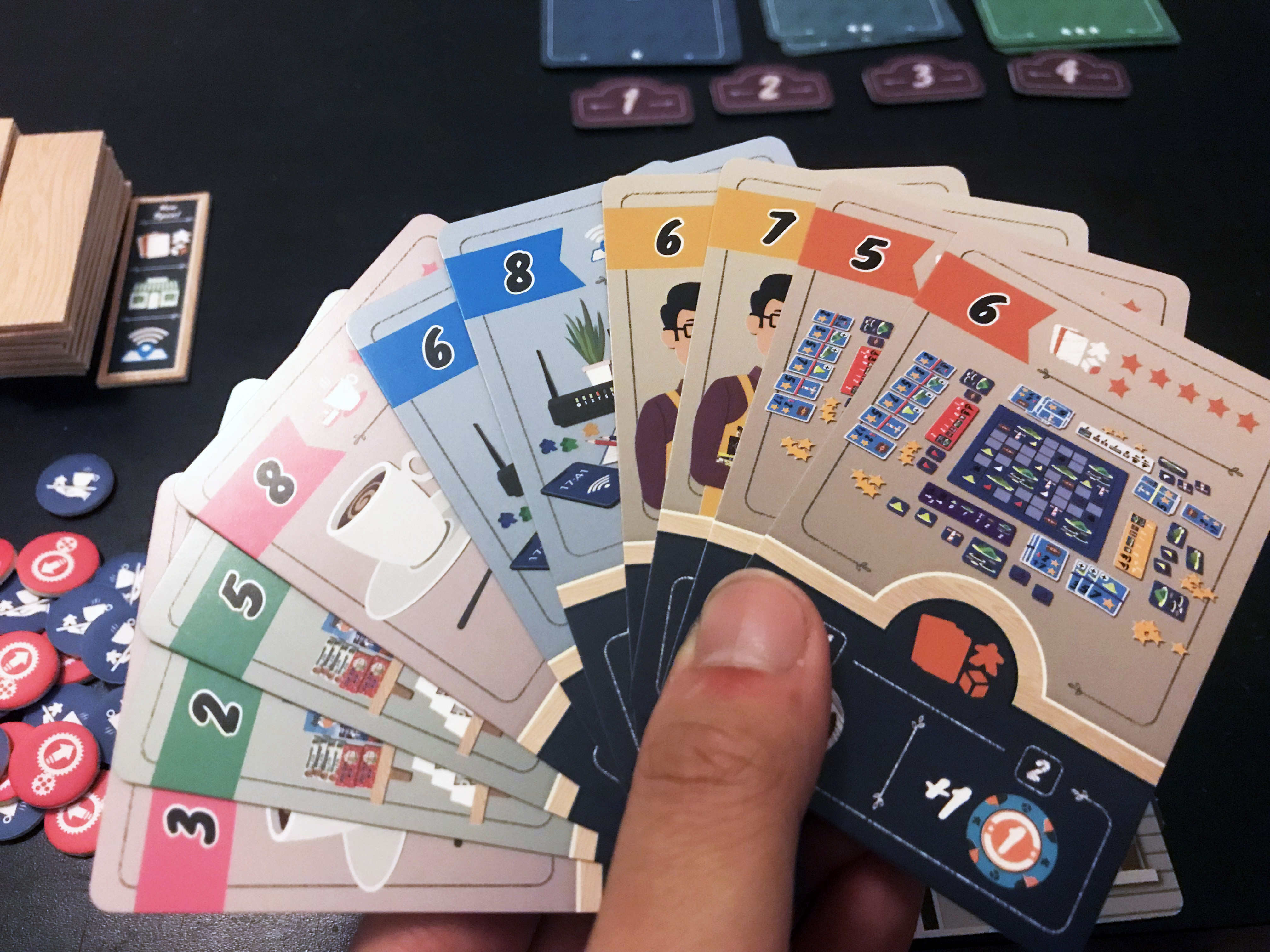 End of the game scoring

After all of the players played their cards, the last scoring phase occurs. You will receive coins based on the Wi-fi icons you have, any customer cards you have fulfilled, your capacity, and your store unique abilities. You get 1 coin for each 2 action discs you have. Then, pay each employee and upgraded employee 1 and 2 coins respectively.

Two big game mechanics are inside Board Game Cafe Frenzy. The first is the card drafting and the second one is the trick-taking. Which one is more important? Well, both are important to win the game. Unlike other trick-taking card game where you get random cards, this game offers something else; you do not get random cards from a shuffled card deck. You have the ‘freedom’ to draft the cards you want to have in your hand.

On a side note, the area capacity also limits the card you can reap the rewards from even when you win the trick that round. Nevertheless, it is not the trick that you want to win; you want to win the game. This means you do not have to win all the tricks; you sometimes need to lose just so you can get extra action discs that might help you to gain advantages.

While it is not a really complex game, Board Game Cafe Frenzy would not be really that simple to play. It’s more tactical gaming rather than a strategical one. Of course, you draft what you want to have in your hands; but the second phase with the tricks means you have to play more reactive rather than proactive to get what you want. 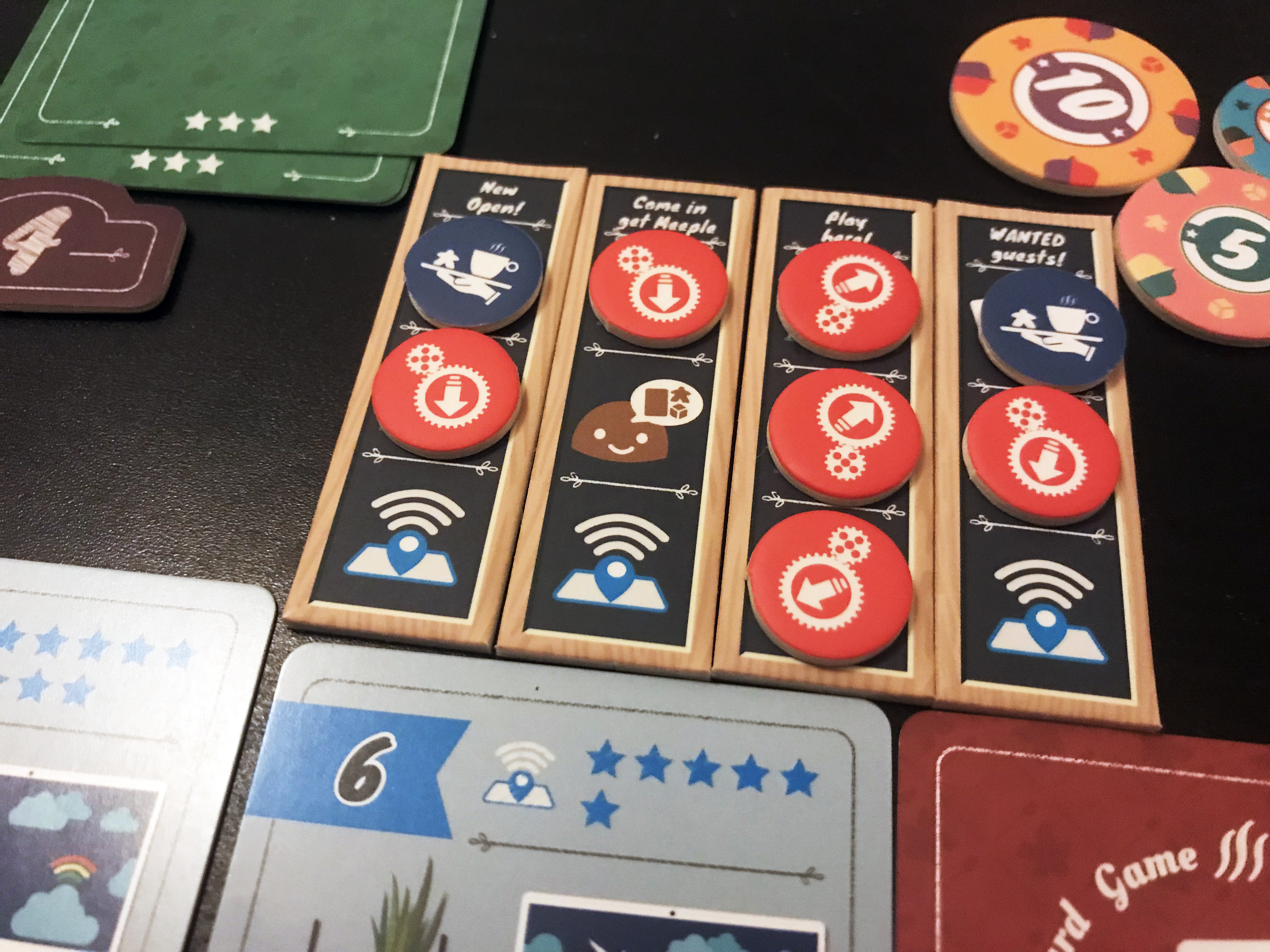 The winning condition depends on how many coins you gain; there are a lot of ways to gain coins at the end game scoring. However, you cannot be too greedy to get coins from all the ways available. Just like you cannot put all things up to decorate your café, you should specialise your board game café here with the resource you have (in this case, your cards) to gain the most coins.

Thematically, Board Game Cafe Frenzy is really spot on. I mentioned one aspect above and there’s one other: the employee. At the end of the day, you have to pay your employee with your coin, too (the upgraded employees are more expensive and that’s thematically correct as well). Component- and artwork-wise, it looks great, too.

What could be better

I wish the transition of the turn order during the card drafting can be smoother, though. It’s a very minor problem but it would be nice to have. However, this minor bug does not affect my gaming experience. There are also some holes in the rulebook that would be easily covered in a one-page-FAQ (it is provided online here). 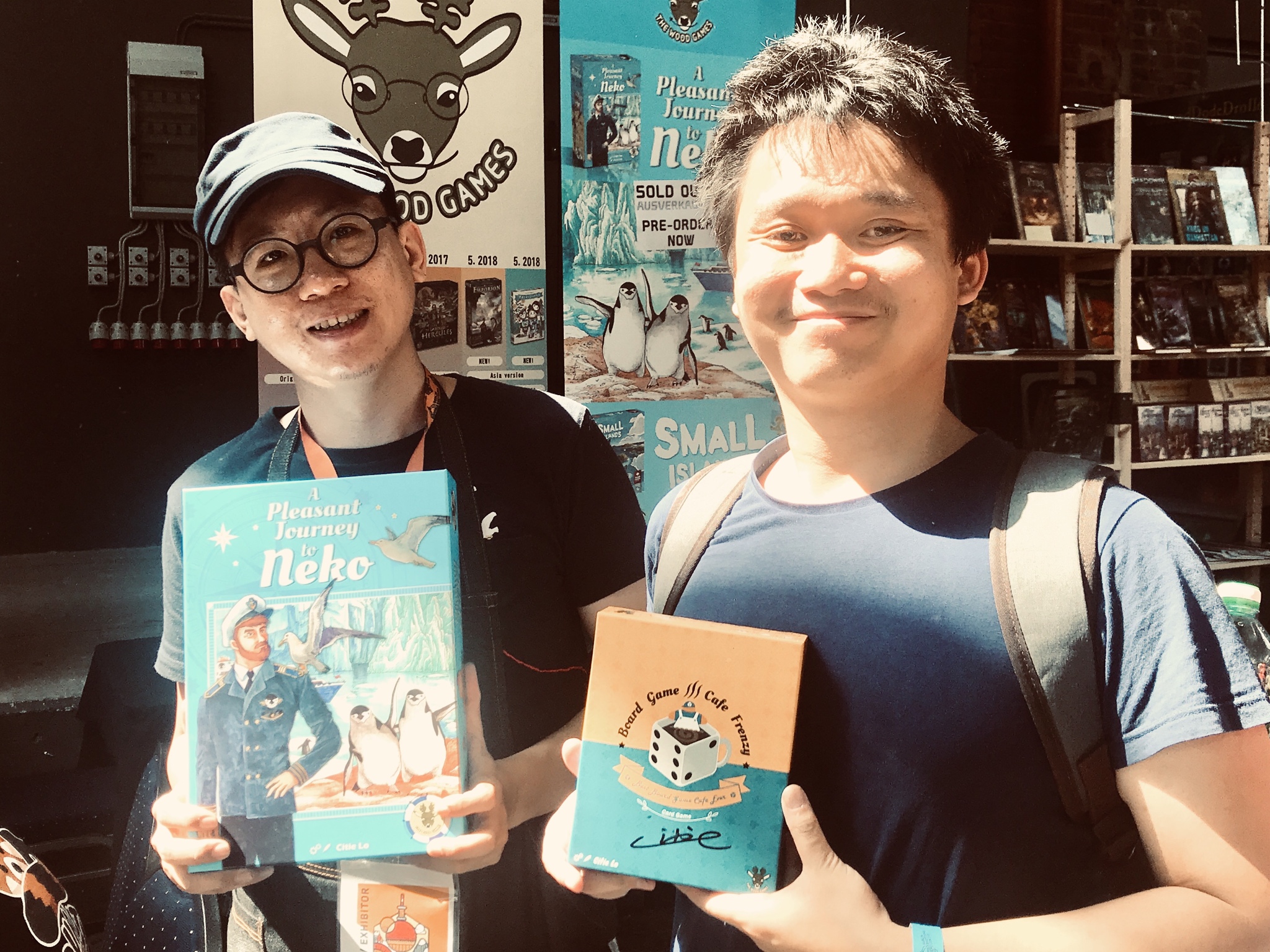 As a trick-taking card game, Board Game Cafe Frenzy takes it to another level. I have once reviewed a game with a similar mechanic, Spring Rally. Just like this game, you do not have to win all battles to win the war.

Easy to learn and to play, this game still has a good depth. A game with 3 or 5 players will be okay but the

most enjoyable one was when I played it with 4 players. I am not a fan of having an AI substituting another player, so the 2-player-session was not really my cup of tea. Nevertheless, this game is quite versatile. You can play it as a filler and also as the main attraction of your board game night now and then.

Above all, this game is not cast in the same mould as other trick-taking games. If you know another game that shares a similar trait, do let us know in the comment!

Board Game Cafe Frenzy will be available in Kickstarter on 3/9! I would encourage you to back this beautiful game! Find it here. 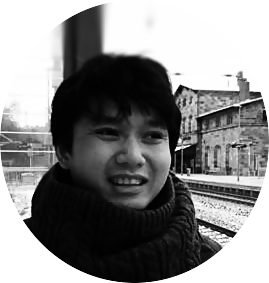