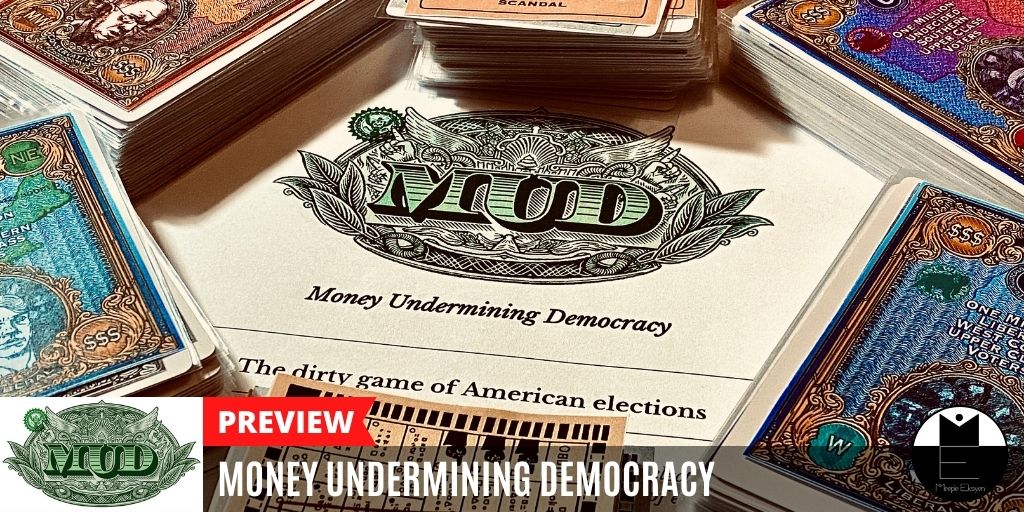 Money Undermining Democracy (MUD) is another preview we did after Shaolia: Great Houses this month. We feel honoured Pillbox Games has trusted us to try their PNP version. Do you know that this publisher was the one behind Side Effects? Their new game, MUD, will get launched on October 6th. Get ready, guys!

Further disclaimer, guys: The MUD version I played in this review was their PNP version. Therefore, I would not comment on their components except the artwork. We will only focus on how to play MUD today. It may still have major and minor improvements and changes in the future, too. The game will be live on October 6th on Kickstarter.

What is this game about?

In MUD, all players take the roles as wealthy presidential candidates. You do rallies and campaigns all over the region to gain voters. Sadly, this game will have to force you to be as corrupt as possible to win. The process matters the least, we only care about the end result. At the end of the day, we should get reminded by Tom Stoppard’s wisdom.

From this point onwards, I will write how to play MUD in detail. This is necessary to give you a clear depiction on the gameplay. However, you can always jump and read our opinion directly below.

“It’s not the voting that’s democracy, it’s the counting.”

How to play MUD

Before we start with the game setup, let’s take a look at the cards that build MUD. They are divided into several categories, the Voters, Powers, and Scandals. The first two categories are combined and will be shuffled together and distributed to players. Each of them gets an initial hand of seven cards. Shuffle the Scandals to build another deck and place it in the middle along with the regular card deck.

To mimic the real “democracy”, Pillbox Games differ the Voters based on their Regions, Political views, and Social classes (who said we have abolished the caste system). The Voters come from the South, Northeast, Midwest, and West Regions. They support two Political parties, the Liberal and Conservative. However, some are Undecided and remain neutral. They are the Wild cards in this game (I will later explain this further in this How to play MUD segment). You will find three income brackets, starting from the Working-class and up to the Middle and Upper ones.

When you successfully gain six Voters of the same Income Bracket, you gain great benefit from them. The Working-class helps you to steal another Voter of this bracket from your rival’s map during each turn. The Middle-class, on the other hand, grants you a more subtle yet beneficial advantage. You can play up to four Voters per turn (instead of the usual limit of three, will be mentioned again later below). The Upper-class voters are more cunning. With their help, you can discard one Scandal per turn, but you have to discard an Upper-class voter from your map as well. 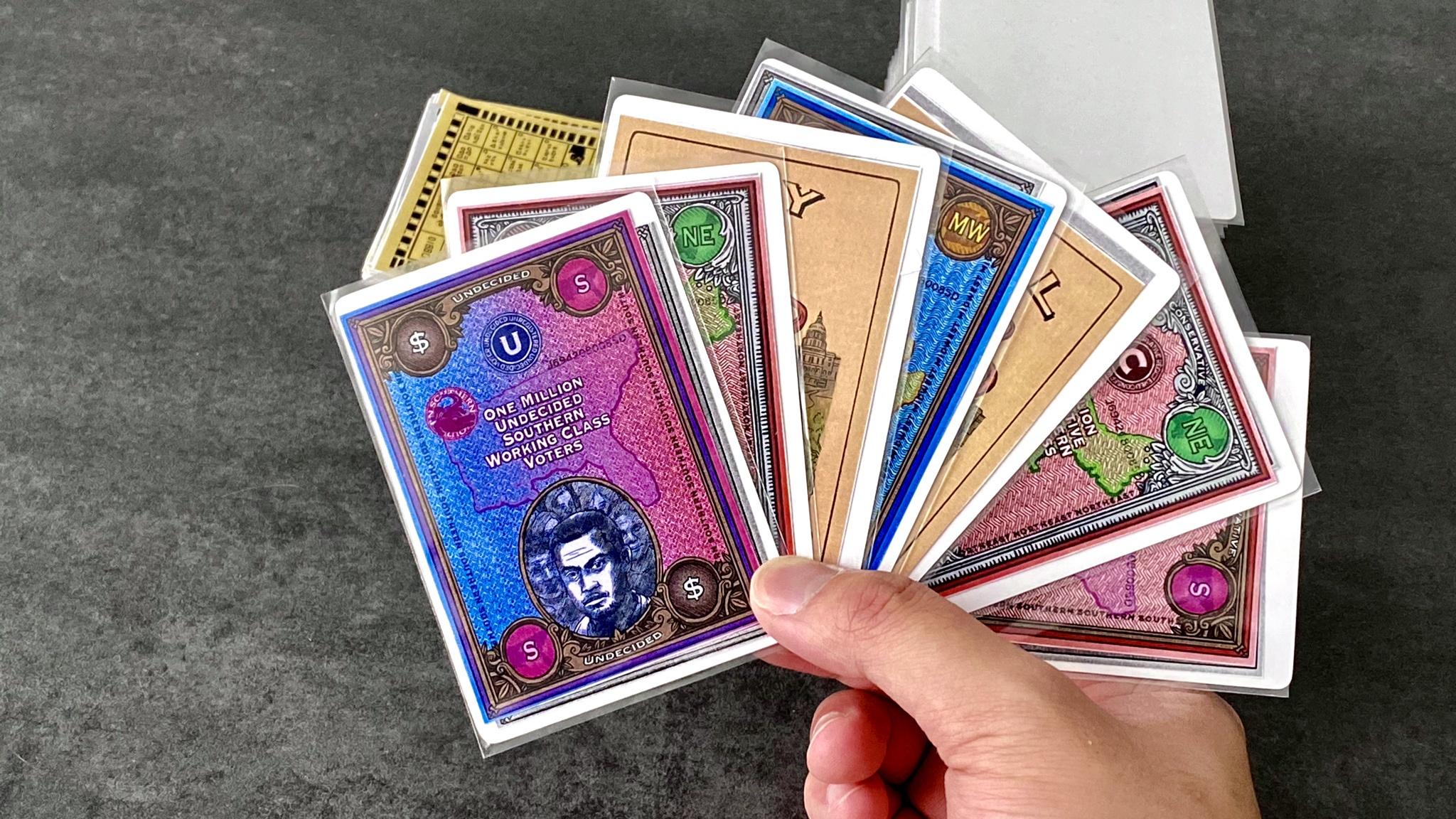 Your hand always consists of seven cards from the regular deck. You will have varied Voters and Power you can abuse.

The Power and Scandal cards

The fun parts on how to play MUD is you’re free to play dirty. As politicians, you will Rat out your rivals and gain advantage through the Power abuse. However, this action does not come free. Whenever you play this card, you need to draw a Scandal card and place it face down in front of you. When it’s revealed, you will get punished.

You can abuse five types of Power. A player can Dig dirt and force another player to reveal his/her Scandal card. Politic has never been so far from Spying the other candidate, seeing his/her hand and take a card. Nothing is more satisfying than to Steal your rival’s Voters and harass them, so they Skip their campaign turn. You may also Shred them to pieces, leaving a player only with a card on hand. You can also apply this effect to yourself, if necessary. The Suppress action helps you to deter other players gaining more votes during one turn.

What you do on your turn

During your turn, you can do two types of action. Maybe you want to start gaining Voters on your map. To do this, simply play a Voter card from your hand face-up in front of you. There is a three-per-turn limit for this action. You can stack the Voters you have bought to organise them per region. As mentioned above, the Undecided Voters are the wild card. You can put them however you like as Voters from either Political parties.

You may also decide to abuse Power. Play the Power card and don’t forget to take a Scandal card every time you take this action. Because it is a risky move, there is no limit to this action.

You can do multiple actions during your turn as long as it does not exceed that action’s limit. Because this is a political game, you may make deals with other players. This includes the possibility to trade cards and create an alliance. However, you cannot play cards if it’s not your turn. After you end your turn, you need to draw cards until your hand comes back to seven. The player on the left takes the next turn.

This term in Latin means “in equal fault”. MUD encourage you to play dirty. That means you can also arrange an agreement with another player to share the blame of a single Scandal. 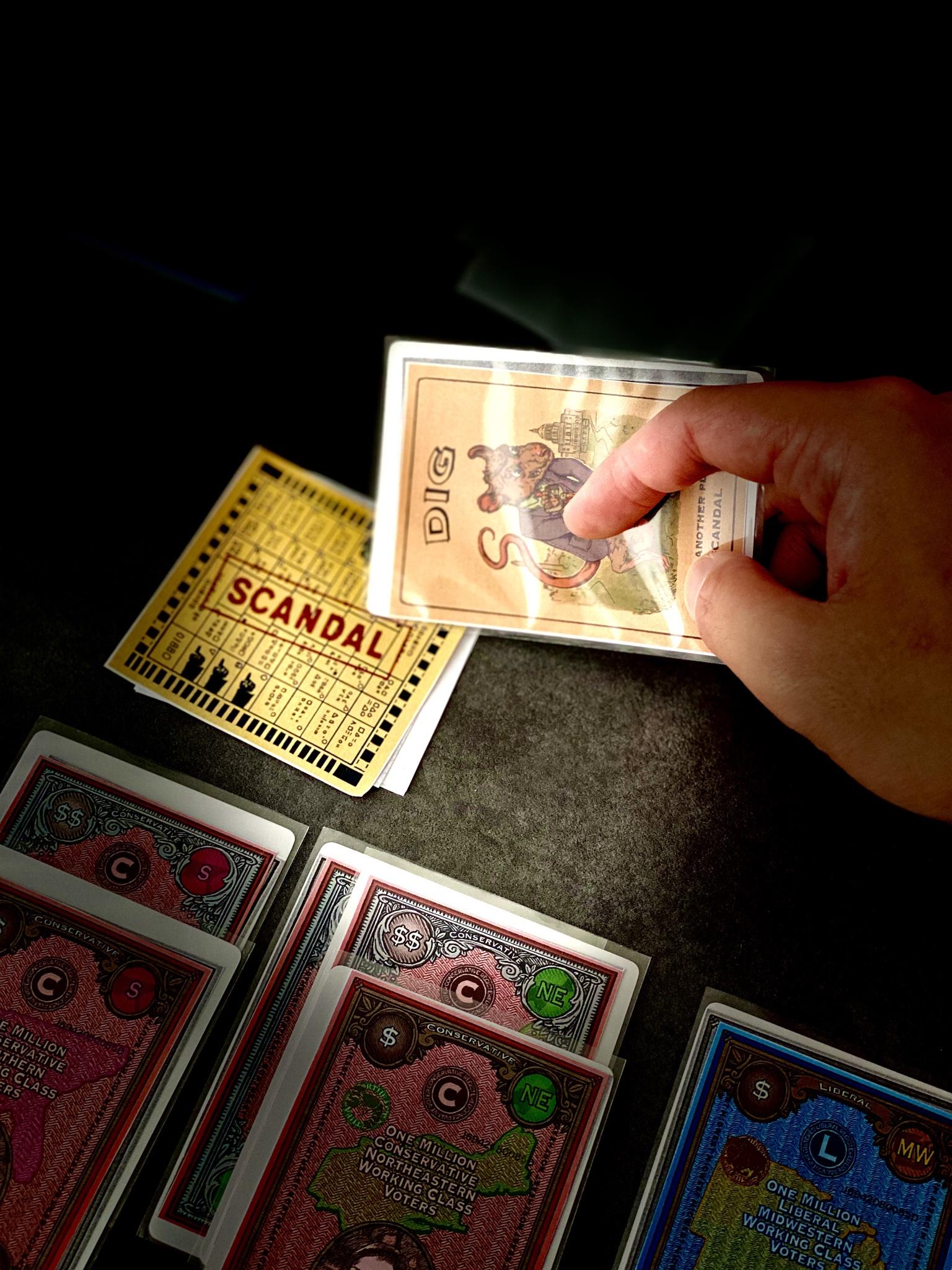 You can play Power cards as many as you can. Beware that it brings Scandal.

By doing this, both of you can share the abuse of one Power or two separate ones. The shared Scandal must be placed sideways to remind you that it is shared. However, you have to remember with whom you share the guilt. When the Scandal is revealed, both players get punished. The Power used this way will not get triggered twice immediately. It will be performed only when the other player’s turn is up.

How to win your presidential campaign

To win the game, one presidential candidate has to gain at least three Voter cards from one Political party in all four Regions. That means you need to have a minimum of 12 cards before you can claim your election victory. If you play a 2-player-game, then this requirement increases. Now, you have to gain four Voters instead of three.

Well, that was a long how to play MUD segment. Now, it’s time to share my thoughts on this game. First and foremost, this game uses the set collection mechanic. I also can feel the take-that aspect because it is a direct one via the Scandal cards. Not to mention that it’s also loaded with negotiations on each turn. Overall, MUD has proved to offer a smooth gaming experience for me. Did I need to bluff to win? Not exactly. 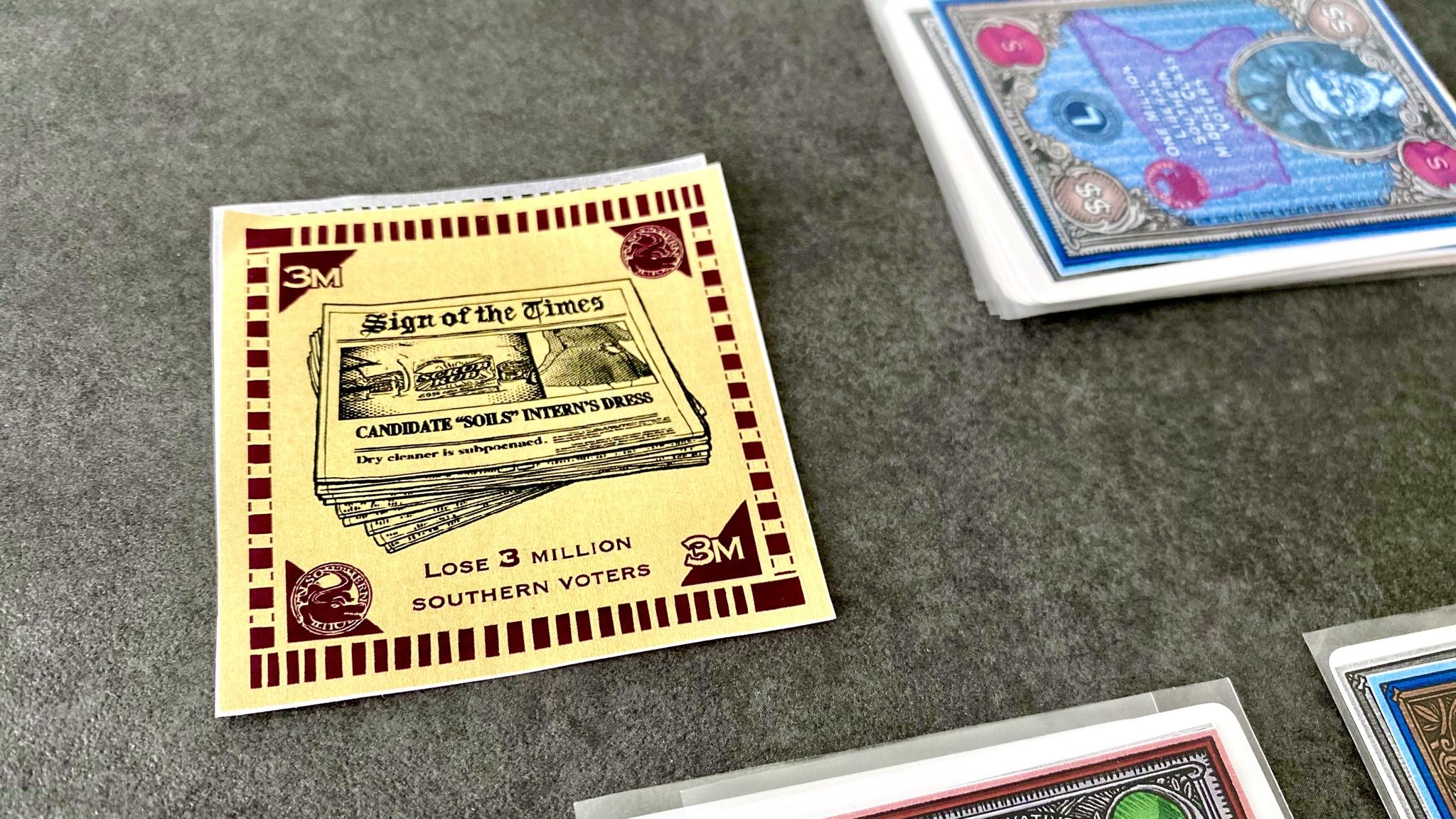 Your Scandal can blow up whenever the other candidate plays a Dig card. Some brings threat and the others may not affect you at all.

Based on how to play MUD, it lies on the borderline between light and super-light party game. Interaction between players is high because of the take-that mechanic and the need for negotiating, especially. Therefore, a two-player game is not really recommended. In MUD, the more presidential candidates, the merrier. The sweet spot is with four players at most.

I cannot say much about the components, as I mentioned in the Disclaimer above. But MUD does have stunning artwork. The colour palette is eye-catching. The illustration of the Voters looks like as if they hired the USD’s artist. Meanwhile, they also try to be as inclusive as possible here by adding necessary, simple text to accommodate players who suffer colour-blindness. The way they illustrated the Rat on the Power cards is really contrasting in comparison to the Voters. I like it. Look at them below! 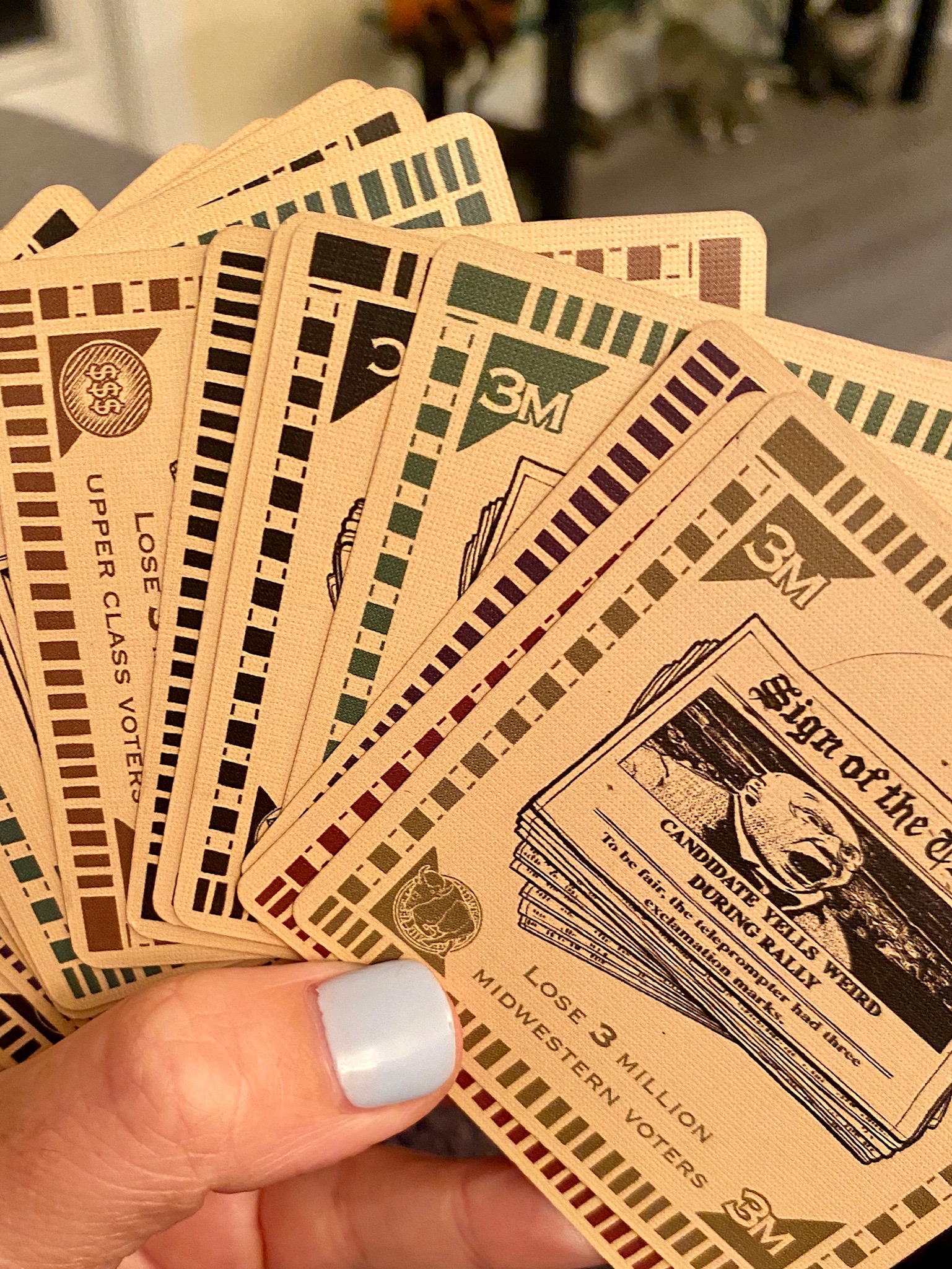 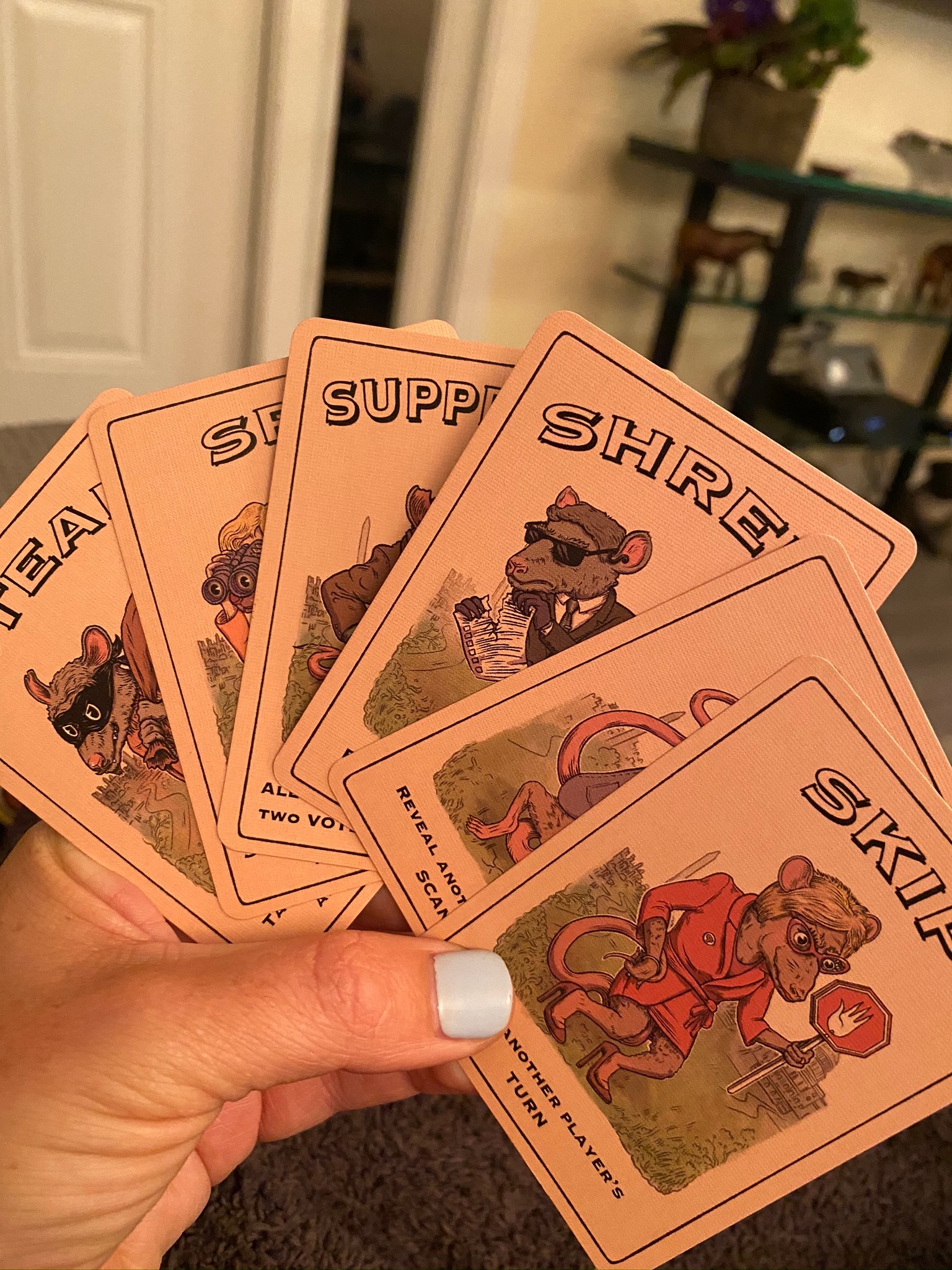 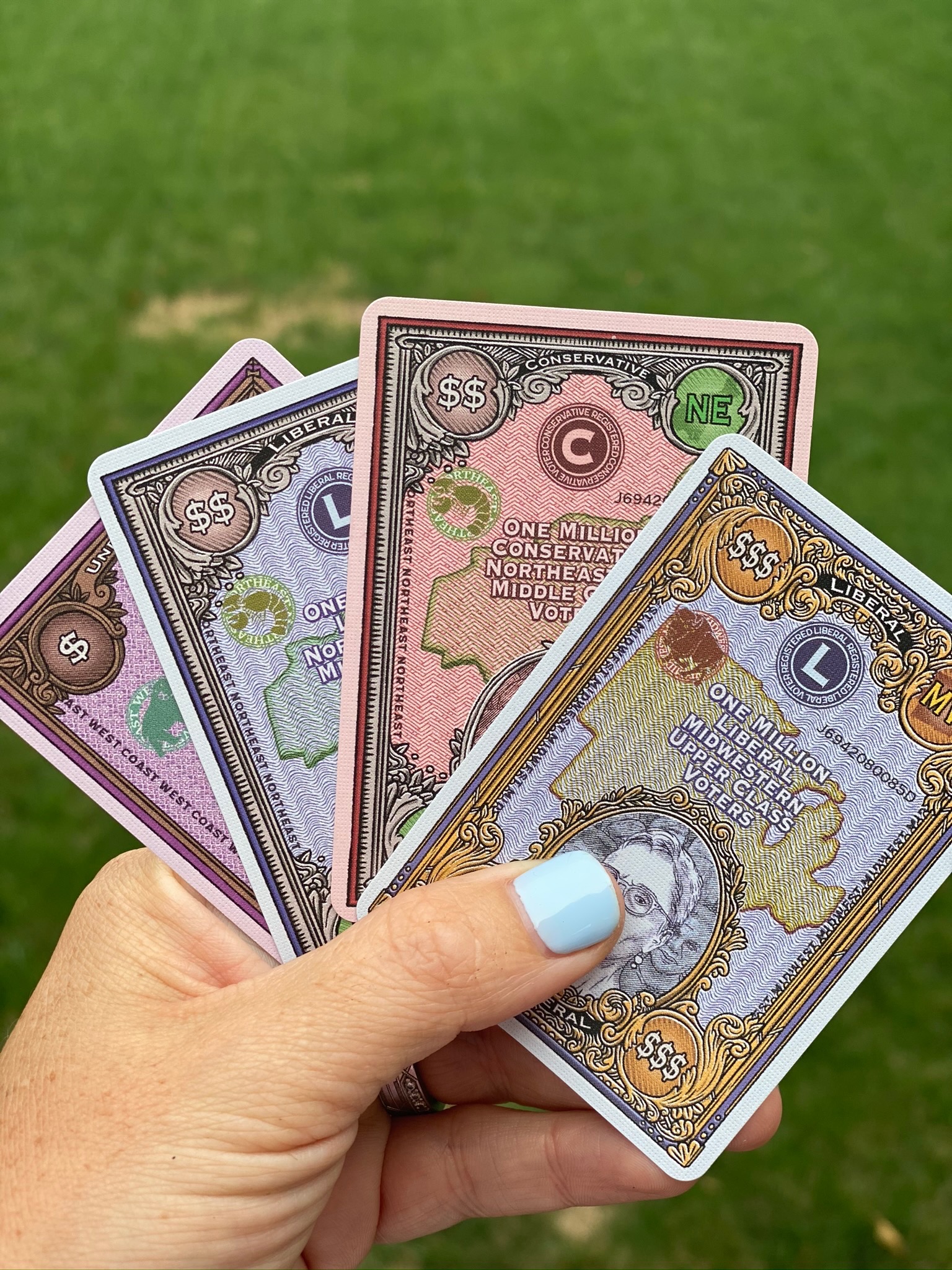 One session lasted for 20-30 minutes top. The gameplay is simple and easy to teach. Take-that aspect is really emphasised via the Power cards. From all type of Power abuse, I like Shred effect the most. Combined with Spy card, you can frustrate your rival. It also works both ways, you can use it to recycle the cards you don’t need and draw your hand to seven at the end of your turn. Making combo as such is something I seek in a card game.

I also appreciate how they managed to implement the punishment towards Power-abusing politician in this MUD. There’s a chance your Scandal will not pose threats to you, but you sure have to be careful against it. The way they added advantages for those who stack more Voters from the same socio-economic class forces you to manage your map as well. Will you spend your precious three turns to gain more ‘Power’ to outwit your opponents and win the election? Or do you want to play it safe and fast? 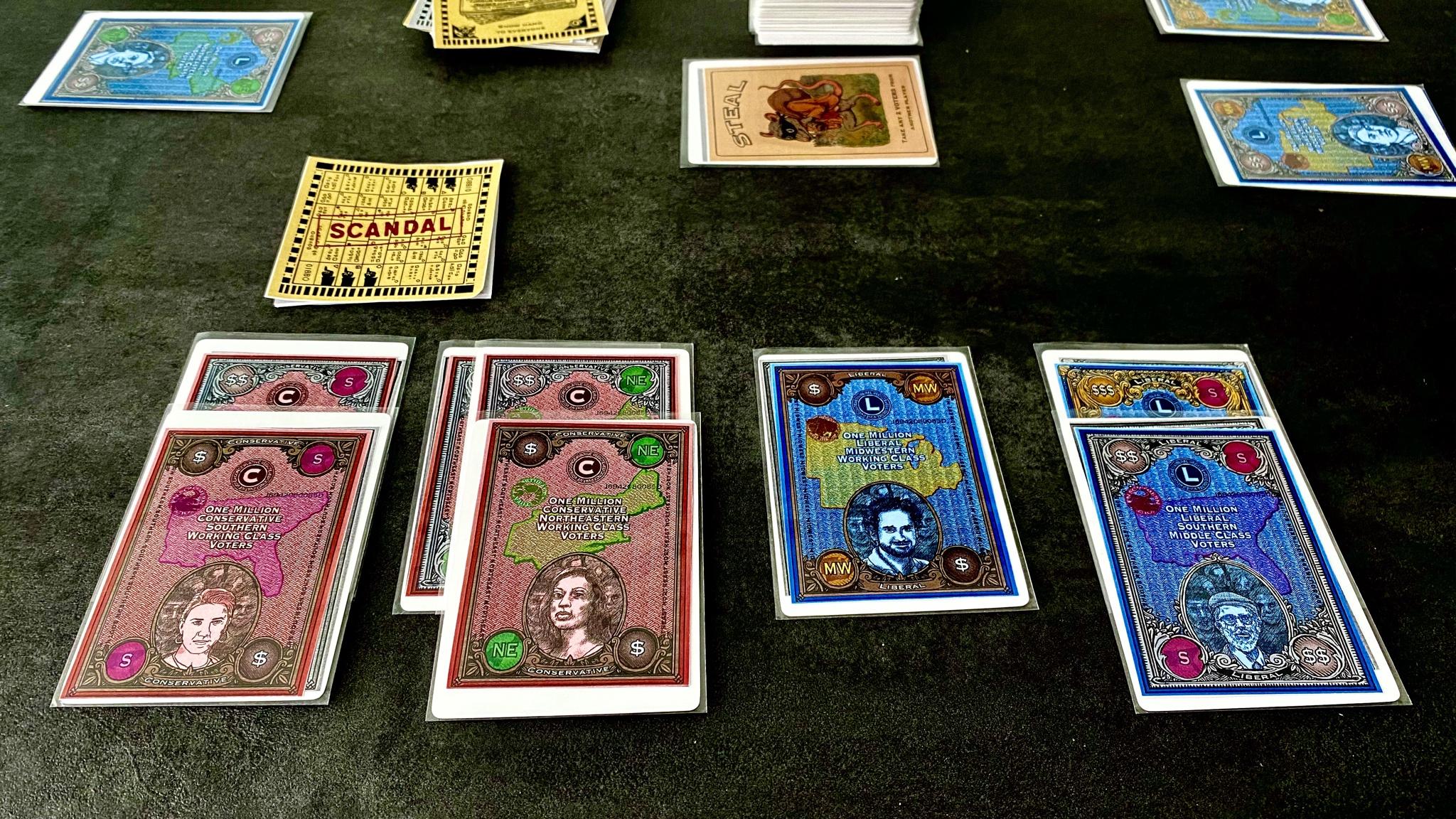 Diversification is essential in MUD. At the end of the day, you don’t care with whom you are aligning yourself, as long as you win the election.

What about the replay value? Well, with so many things can happen during the game, it sure has some. You can play it over and over, and MUD will still be fun. The easy gameplay means this game is suitable for a filler, too. However, a direct and punishing take-that and the intense interaction from negotiating makes it a bit hard to be a gateway game for some new players.

Thematically-correct & what we can learn from the game

I can say that this game represents the actual political situation during the presidential election almost perfect. Without a doubt, the political theme is assimilating mutually with the game flow. Pillbox Games’ idea to take daily life topic into the game is doing well in this MUD. Through this game, they showed that those truly seeking political power don’t actually care which party they belong to. As long as you get Voters, be it Liberal or Conservative, that will do. You also realise that despite the corruption, being neutral/Undecided does not solve the election problem. Your vote can be manipulated by those in power. 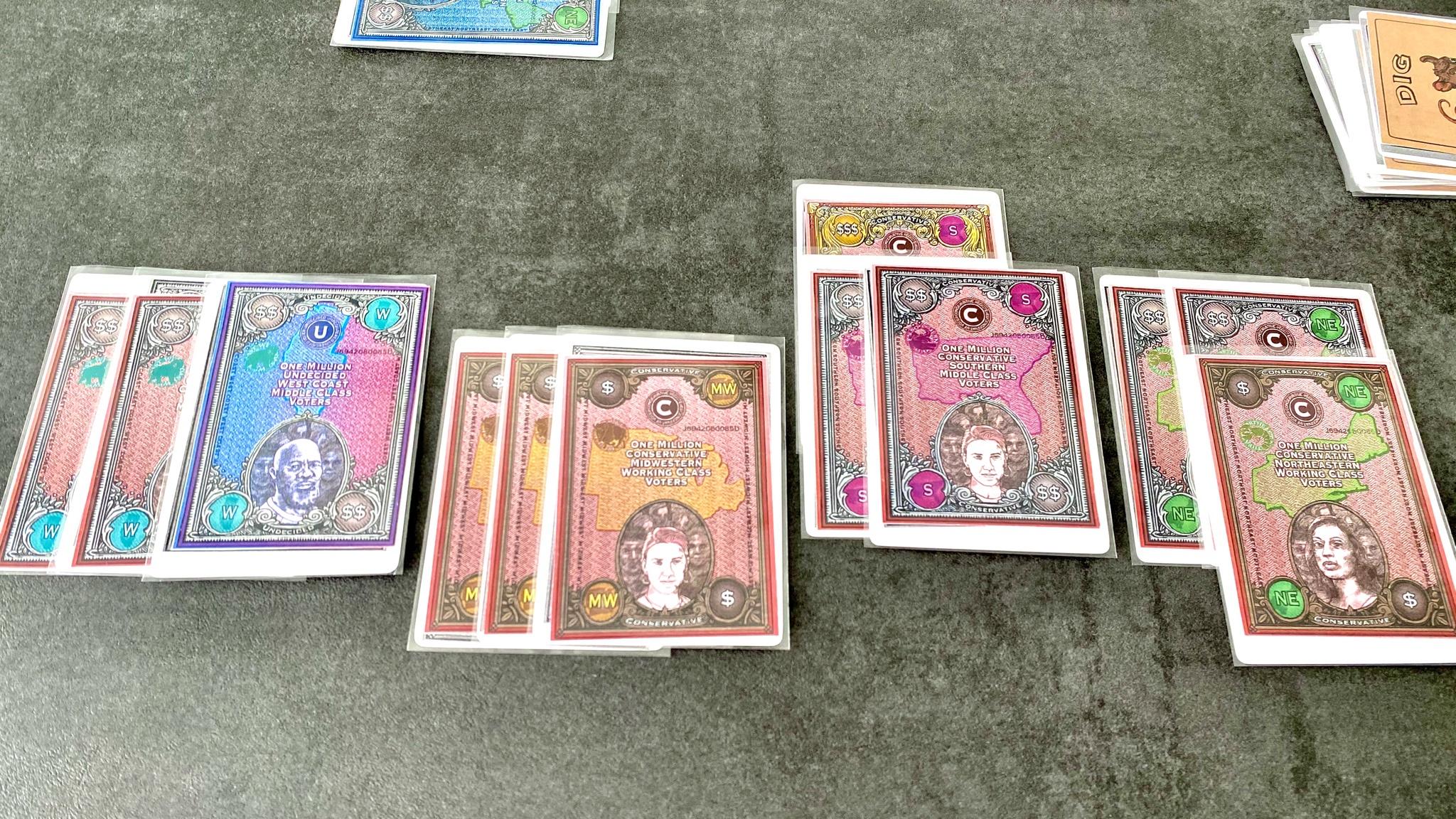 You win when you are the first to gain three Voters of the same party on each region.

Money Undermining Democracy is a simple, fun game that turns you into a typical, dirty politician. The set-collection and loaded interaction between players guarantee a fun time. It also has a high replay value, and US$25 is a cheap investment for multiple fun sessions. The game has not only elegant, easy gameplay but also a deep and meaningful yet subtle value that we can learn. I rarely get so philosophical after playing a game. It granted me a better understanding of politic in general. Will I get this game? I will absolutely purchase MUD right away when Pillbox Games releases this game. 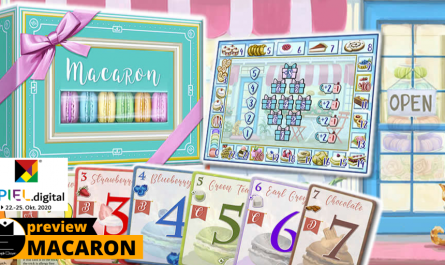 Macaron: A trick-taking game that makes you starving // SPIEL.Digital ’20 [Preview] 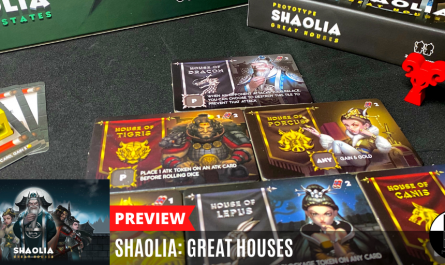 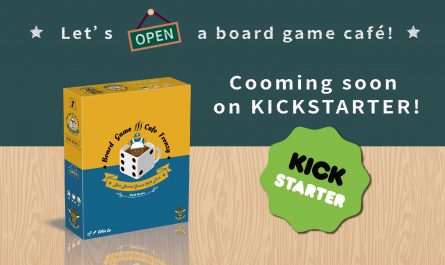