Hello, Archons. It’s been awhile since our last conversation. It’s understandable, hopefully, since Fantasy Flight Games paused their development due to their circumstances. They disclosed the fact that there was a problem with the algorithm, which randomizes the sealed deck. Hence, their plan was abruptly stalled. Previously, they mentioned the new set, Keyforge: Winds of Exchange — along their plan to bring up this game to the digital platform with Stainless Games.

Some of us even thought that this might be the twilight of our beloved game. What would happen with the latest expansion, then? When will they release it? Will this be the last set before Keyforge ceases to exist? Is this game really facing its demise? To be frank and fair, these questions are unsurprising. The publisher has quite a track record to cancel their running games so suddenly. One of them was even a hit asymmetrical card game.

To give a short answer to the question above: no. Keyforge is not dying. It’s alive, and what’s more, it’s the dawn of a new era. After a long period of radio-off from Fantasy Flight Games’ side, we finally see light at the end of the tunnel. Unexpectedly, they sold Keyforge to a new publisher, the Ghost Galaxy. It is a wind of exchange, indeed.

Anyway, Keyforge: Winds of Exchange brings a new House to the party: Compact of Ekwidon. Along the new kid, the familiar House Mars and House Brobnar rejoin the fight, too. With this new trio, three Houses from the previous set will cycle out. We will not see House Shadows, House Logos, and House Untamed for a while. In my opinion, they are quite staple. 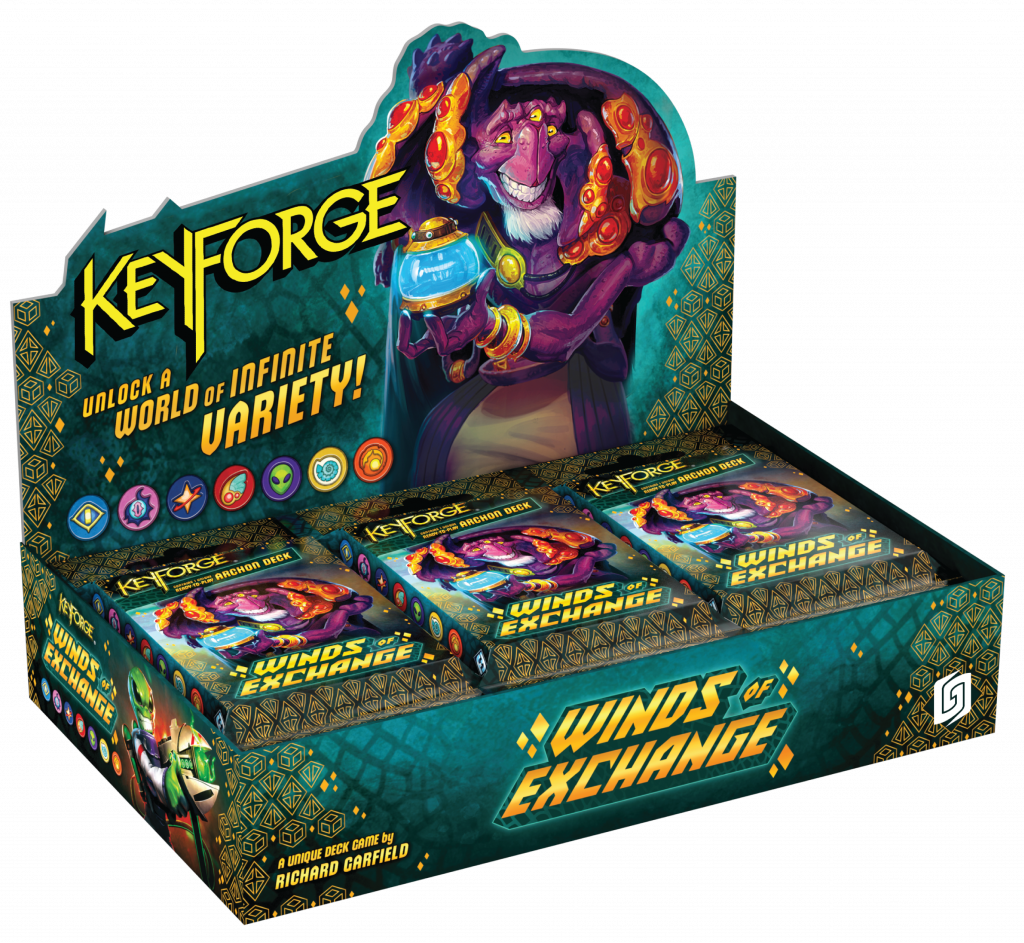 Ghost Galaxy is a new publishing house funded by Strangest Star LLC. The latter one is a company founded by Christian T. Petersen. It’s noteworthy to mention that he was also the ex-CEO and the founding father of Fantasy Flight Games itself. Fun fact, Richard Garfield mentioned that he was pitching the idea of this game for the first time to Christian. Hence, I can’t wait how they will develop and shape the game even further.

To kickstart their move, Ghost Galaxy has been busy showcasing Keyforge in the big convention. At this point, all the fans in Indonesia, including myself, were quite jealous. We also wanted all those merchandises sold on the spot!

Looking back to 2020, they did tease a plush of Fuzzy Gruen at the HQ of Aconyte Books. And guess what, Ghost Galaxy really sold this at GenCon 2022!

Besides the plushes and other merchandises, all visitors could also purchase Keyforge decks. They provided the co-op packs for the multiplayer experience, too — the Keyraken and the Abyssal Conspiracy were also available for sale.

In parallel, a Keyforge tournament was held with 192 participants. With this high-level spirit, I guess the future of the sixth set and the game itself are in safe hands. Keyforge: Winds of Exchange will surely deliver and better managed.

Keyforge: Winds of Exchange will be available to pre-order on Gamefound. This is a unique approach from Ghost Galaxy, using a crowdfunding platform to raise money and release the new set. For now, the campaign page is still a draft — there is a gift for those who follows. I’m very likely interested in backing this one, since one of the nice ‘Reaper of Æmber’ pledge includes the possibility to customize the name on the deck! More importantly, the deck is tournament-legal.

The campaign will get launched on September 9th. Until the project is delivered, let’s enjoy the ride together. We’ll be in touch, hopefully soon.

If you like this review, please consider supporting us, so we can provide you with better contents in the future!

I am an owner of a board game café and KeyForge enthusiast. The latter one is the topic I will contribute mostly in this blog. I have been playing board games since 2015. Not to brag, but my collection is growing every year. As an owner of a board game-related establishment, my favourite phrase is “What are we gonna play tonight?” You can find my café in Depok, Indonesia.

Brew: Restoring balance in a world with chaotic climate? [Review]

Isle of Skye: From Chieftain to King, an old-but-gold tile-placement game [Review]

Buy Me a Coffee

Sparta! Struggle for Greece, a clash between Athens and Spartans [Review]