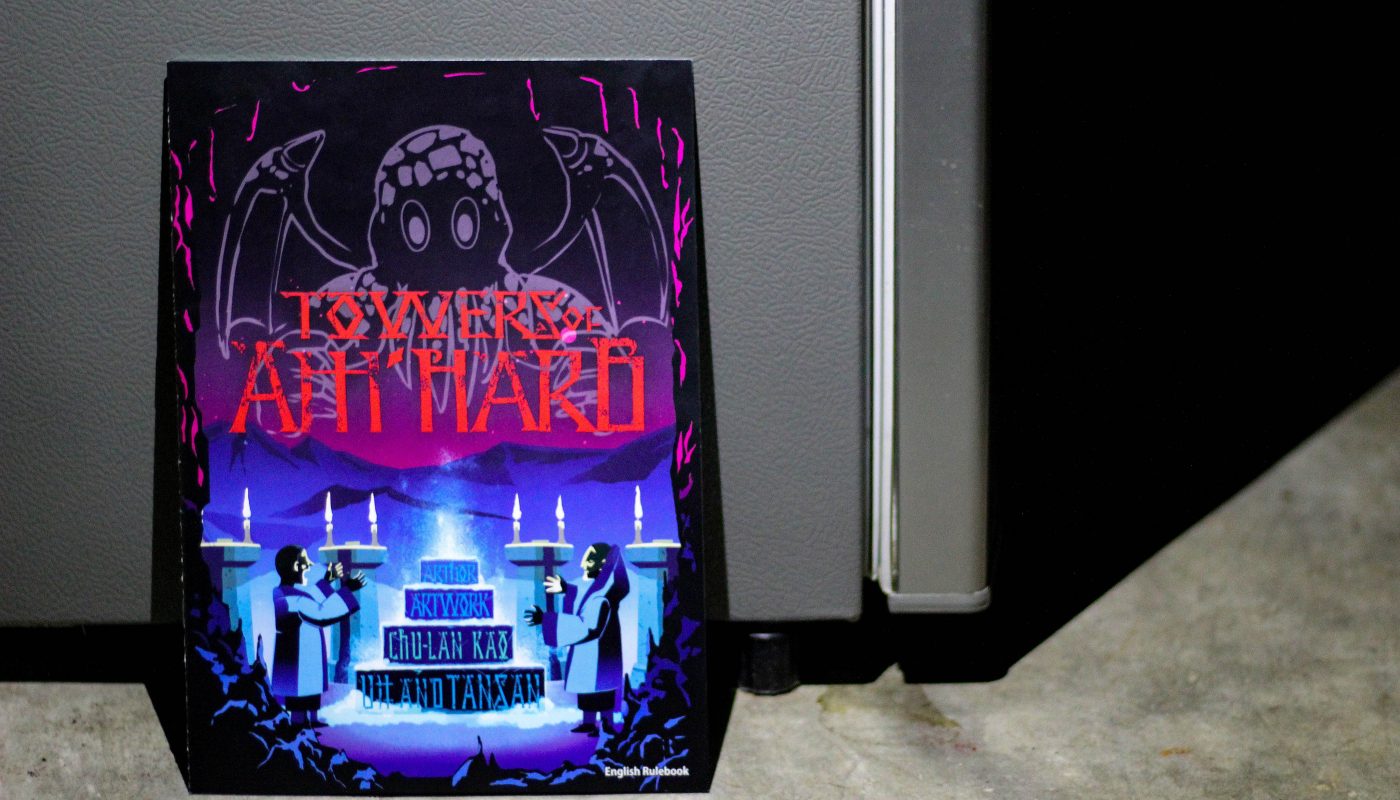 H.P. Lovecraft, The Call of Cthulhu

It is said that eons ago, the earth was once ruled by great beings with unfathomable cosmic powers. No one knew where they came from, but nevertheless, their powers were vast and immeasurable. Some fear those beings, while others, having tasted a glimpse of their power, embrace and worship them. Then suddenly, those beings disappeared. Some claimed that they were dead; others believed that they only went into slumber, waiting and biding their time to return once more amongst men and it is the duty of those believers to awaken The Great Old Ones.

Lovecraftian horror has been a part of pop culture for quite a while and is one of the most famous subgenres of horror stories. Many books, movies, and of course, board games revolve their theme around the Cthulhu Mythos. Today we are going to discuss the latest game from Moaideas Game Design, Towers of Äm’Härb.

We are lucky to get a copy of this game to try it out ourselves, so shoutout and thanks to our friend David Liu for sending us this amazing game! (Tower of Äm’Härb was premiering in Spiel Essen 2019) 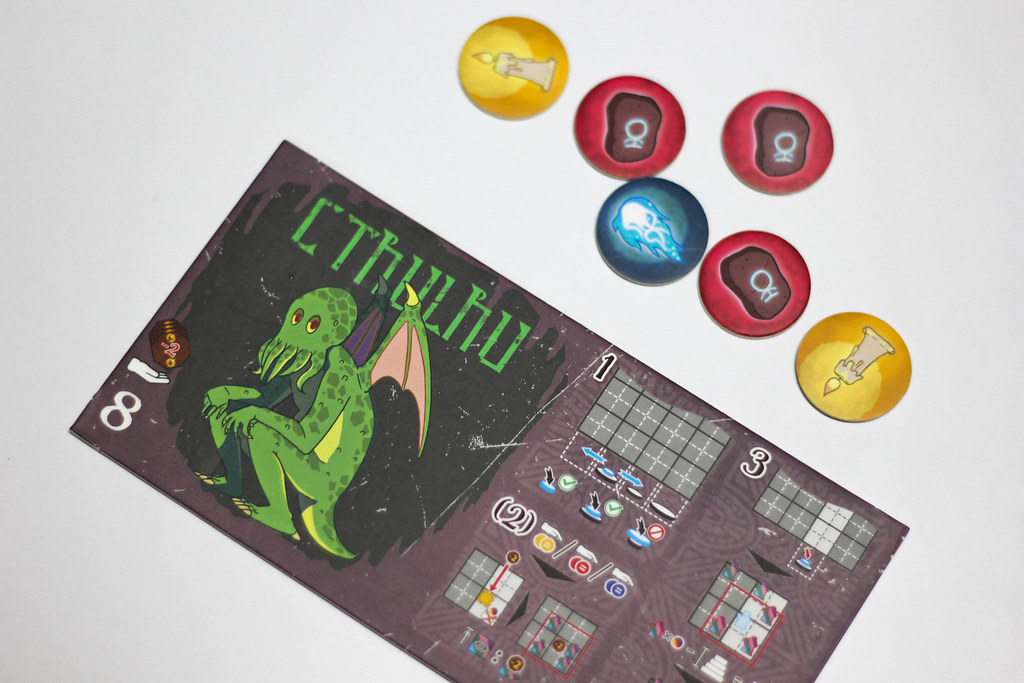 Towers of Äm’Härb tells the story of groups of cultists that worship different Ancient Ones. In an expedition to the uninhabited island of Äm’Härb, your group found mysterious towers that contain traces of cosmic powers of the Ancient Ones. The duty falls upon you to call them back to the living realms. However, you are not the only one who has realized it. Other groups who worship different Ancient Ones have also made their move. This must not continue! You must unlock the secrets of the towers before the other groups are able to do so to ensure that only the true Ancient One awakens.

In Towers of Äm’Härb, players compete to gain control of the doom altars scattered throughout the island using their group of cultists. Players send their cultists to the island using a unique Tower of Hanoi mechanism and are able to borrow the cosmic powers of the Ancient One they worship to gain advantages against their opponents. At the end of the game, players calculate their influence in each altar and the one with the highest influence will score points. The player with the highest points will succeed in summoning the Ancient One from its slumber and thus, becomes the winner of the game.

Preparation for Calling the Ancient One back to the Living Realms

Setting up Towers of Äm’Härb is really simple. First, take out the modular island board from the game box and arrange them as seen in the rulebook, depending on the number of players. This ensures the correct number of altar available for the player count. The next step is to place the altars throughout the island on the designated spots (spaces with the octagonal symbol). There are 3-point altars, 4-point altars, and 5-point altars that are used in this game, also depending on the number of players to determine which altars will be used and how many. The altars are placed randomly with one restriction: 5-points altars should never be placed on the outer spots. After that, fill the remaining empty spaces with random resource tokens. 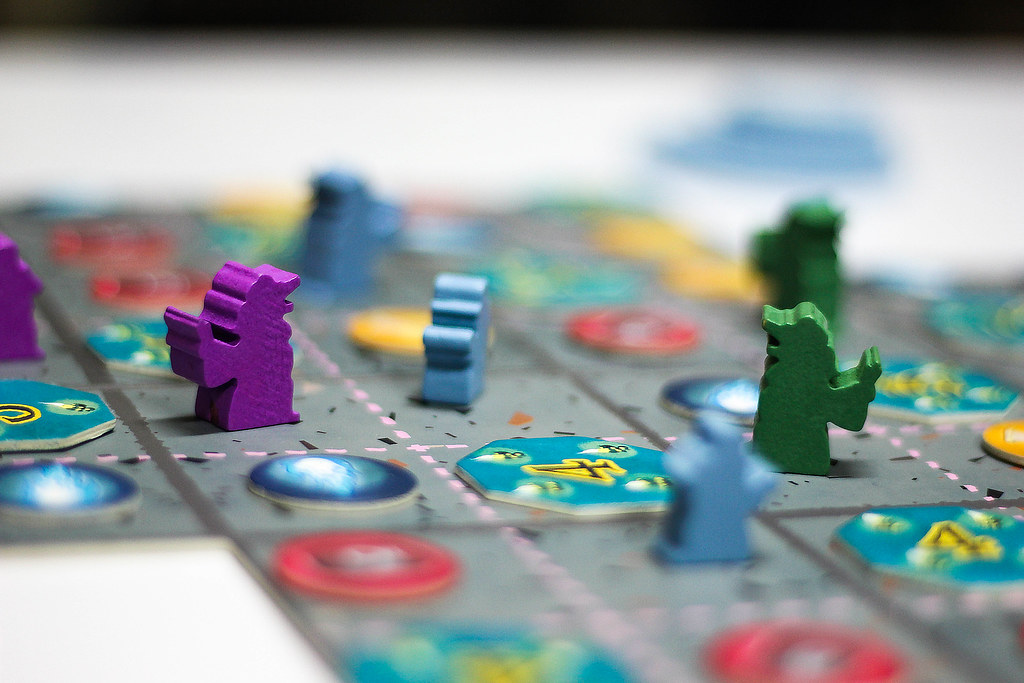 Each player picks a colour and receives the tower stacks and disciple token of his or her respective colours. Then, all players are given two-player boards, which will have different Ancient One portrayed on the board. Players choose one and discard the other back into the box. The chosen Ancient One will be that player’s patron for the game.

There are eight different beings to choose from, each with its own unique cosmic power: Yog-Sothoth, Nyog Sothep, Shub-Niggurath, Dagon & Hydra, Nyarlathotep, Cthugha, Hastur, and of course, the good ol’ Cthulhu. Some of their powers utilize unique tokens, so if one of the players chooses the entity with such powers, take the appropriate power tokens from the box. Players must sit orthogonally adjacent to each other to play the game (i.e. take the north, east, south, west position of the table).

The Ancient One Summoning Ritual

Every good cultist should always remember the systematic step on how to summon his or her master. Therefore, for cult leaders like you, here is the “How to Summon the Ancient One from the Deep Cosmos” guidelines: 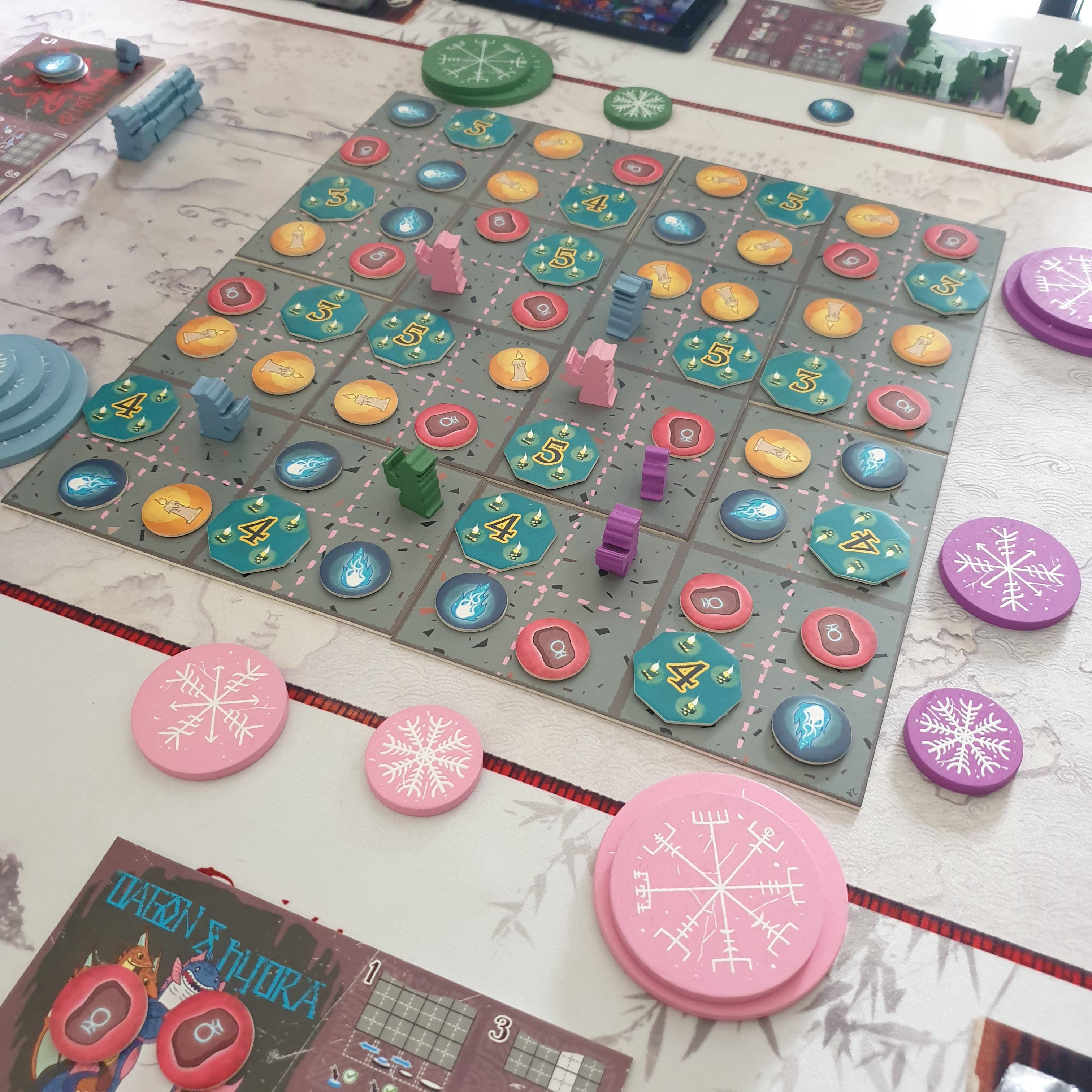 Step 1. Put your tower stack at the rightmost column area.

Step 2. Move the topmost piece of a stack to another column area. Each player will have four column areas in front of his or her side. Using the Hanoi Tower principle, players may only place a smaller piece on top of a larger piece. The column where you place your tower piece becomes you active are for the turn.

Step 3. Pray to your Ancient One master to borrow some of its cosmic powers to manipulate the battlefield. As always, your master does not work for free. Offer two identical resources as a sacrifice to appease your master and gain their power for the turn. If you cannot pay, do not even think about borrowing its powers. You do not want to make him (her?) angry.

Step 4. Send your henchmen to one of the spaces in the active area to take control of the altars on the island. Your followers will give you influence points on adjacent altars. You should always remember that you have two types of followers, three priests (the larger meeples) and six disciples (the smaller meeples). The priest will give you three influence points on each altar, while the disciples will only give you one influence point (but, hey, still better than nothing, I guess). Their blind loyalty will also allow them to fetch any resources they come across during their mission. Of course, sending them to the island may not always be free. Sometimes you need to give a little bit of incentive so they are willing to go to the altars that already have other cultists around them. Luckily, the power of your tower will provide you with a discount! (Do not ask me how it is able to do that, just accept it and move on). For each other cultist (including your own) on the eight adjacent areas, you need to pay one resource, minus the height of your tower in your active area, which means higher tower equals higher discount. (Disclaimer: never mention to your followers that their soul will be offered as a sacrifice to your master at the end of the game, any summoning of an Ancient One during the course of the game is your responsibility and yours alone).

Step 5. Repeat step 2 to step 4 until you run out of followers to sacrifice, *cough* I mean to send to the island. As soon as one of the cult leaders put his or her last follower on the island, it triggers the end of the game. Everyone gets one last turn before the world ends. 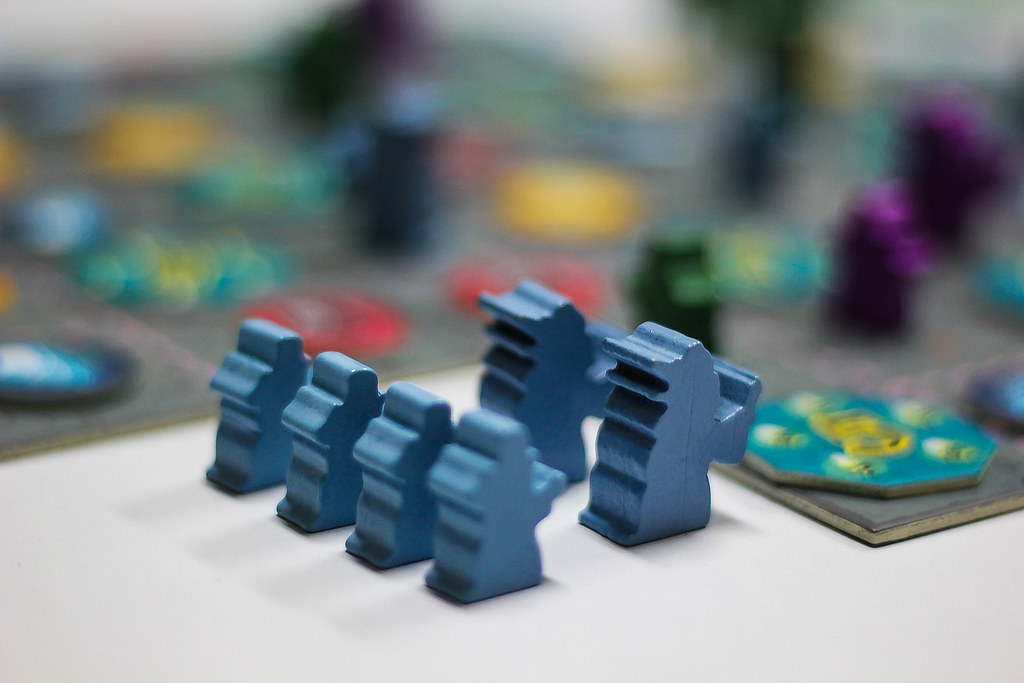 Step 6. ??? (Nothing to see here, please proceed immediately to step 7)

Step 7. For each altar, calculate the total influence of each cult leader by totalling the influence of all of his or her followers. The leader with the highest influence will gain the doom points written on the altar. If there is a tie for the highest influence, all leaders tied will gain the doom points, for the Ancient Ones are benevolent and generous. The cult leader with the highest doom points wins the game and together with his or her master, that person will bring the world towards its DESTRUCTION, *cough* I mean, SALVATION. 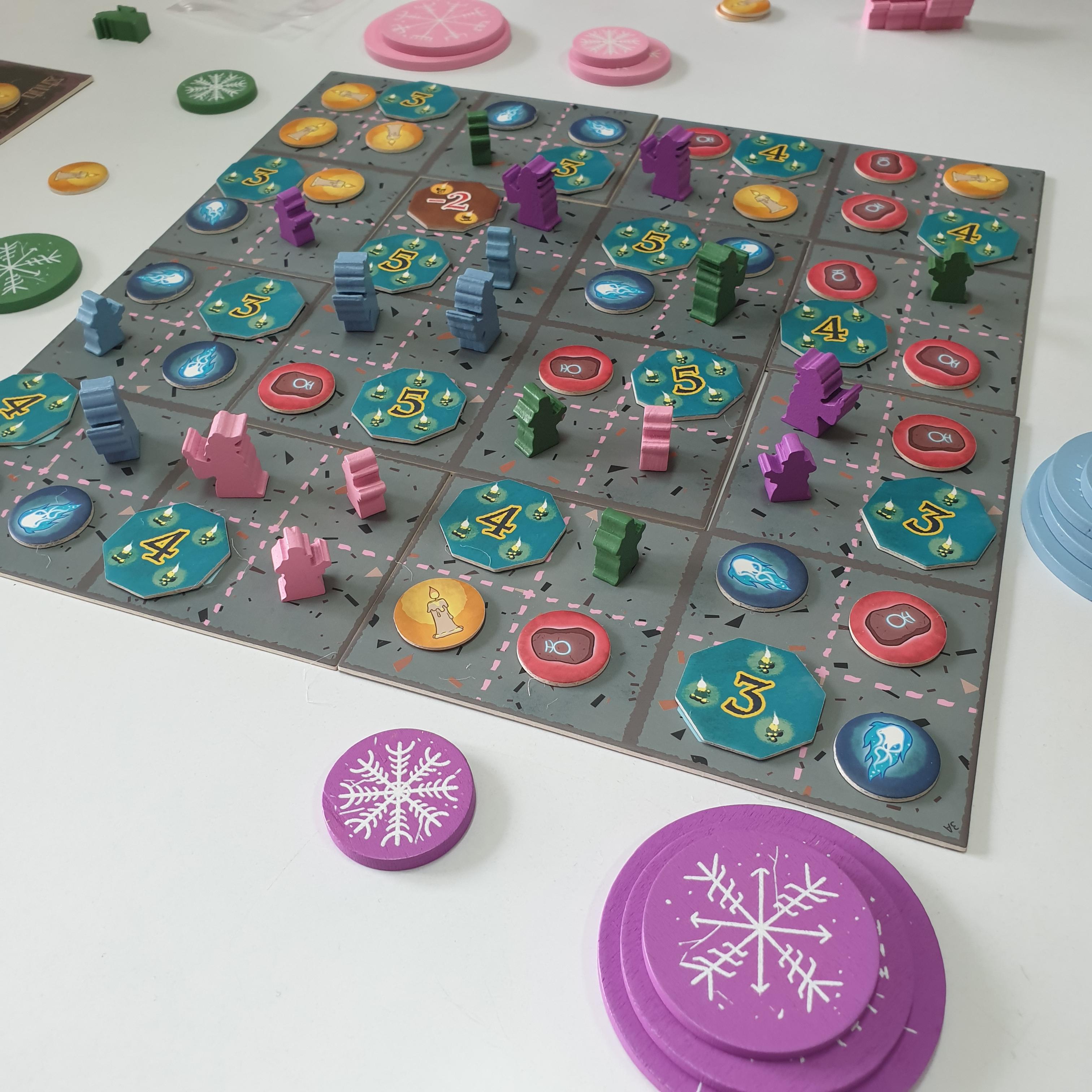 At first glance, Towers of Äm’Härb looks like it is a simple worker placement/area control game and it actually is. However, it still offers some strategic depth for players who enjoy heavier games. Towers of Äm’Härb is one of those rare games that manage to hit the middle ground for casual and serious players perfectly. For me personally, there are two features of the game that become its unique selling point.

The first one is, of course, the incorporation of the Hanoi Tower mechanism into the gameplay. This classic mathematical puzzle adds another layer of depth to the game while still making it easy to learn. Spread your tower thin and you will have more flexibility to place your worker on later turns with less discount. Stack your tower in one place, you will get more discount, albeit at the cost of less flexibility. As a player, you need to find that balance between discount and flexibility and a single misstep could cost you the game. For puzzle junkies like me, this game serves as a good brainteaser. 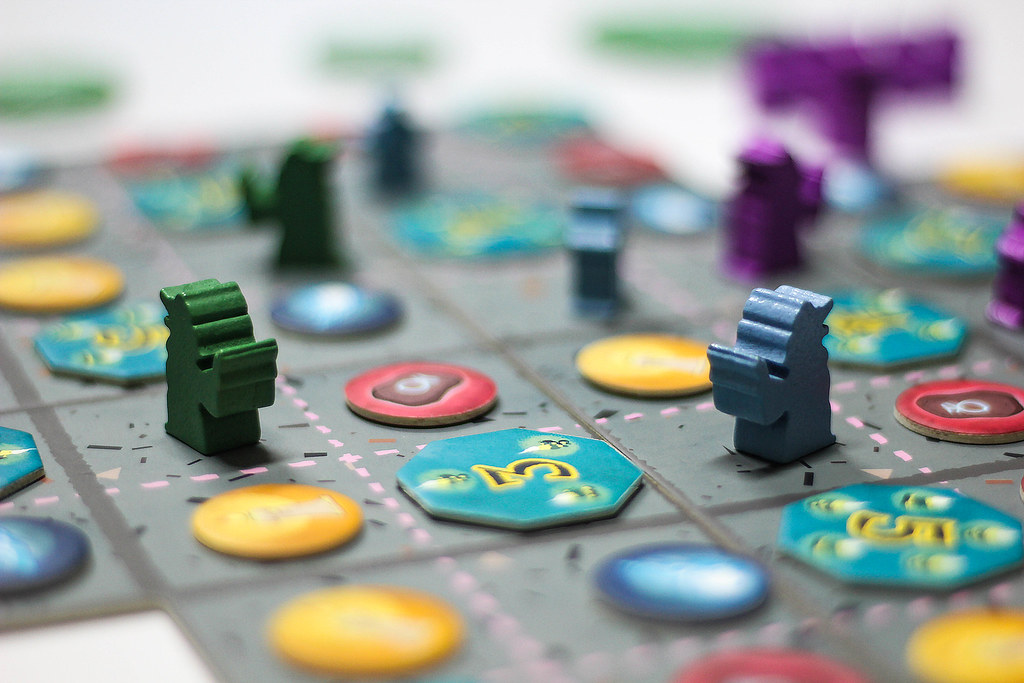 The second interesting feature of this game is the asymmetric nature of the game. Earlier I mentioned that the players must sit orthogonally adjacent to each other, which means that each player will have a slightly different perspective to the board. This also means that every action that a player takes will affect other players from a different angle. Combined with the different cosmic powers of the patrons and the limitation of the towers, players need to think extra carefully where to place their workers to gain maximum influence on the board. It usually requires players to place their workers where it can influence two or more altars at once, much like in a Venn diagram and yes, those places are basically warzone throughout the entire game. The game almost feels like a game of four-man chess for me.

I really like that the cosmic powers of each patron are different enough which gives them identities. The problem with asymmetric player power usually lies in unbalanced powers but in Towers of Äm’Härb, I do not notice that problem. The cosmic powers are different but balanced enough and they are quite enjoyable to use. Sure enough, there are some powers that I consider “vanilla” and limited (the power of Nyarlathotep, to be exact) but it does not make the game less enjoyable for me. No matter which power you get, a smart player will still be able to utilize it to gain advantages. 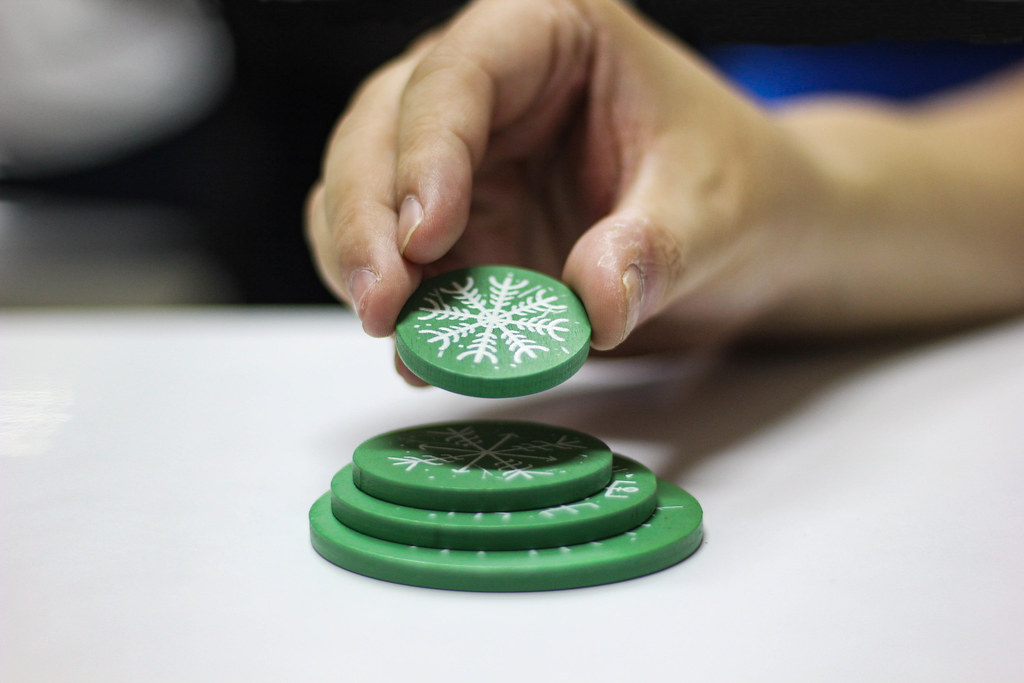 Lovecraft? Check. Area control? Check. I must say I am overwhelmingly surprised by the quality of this game. A simple, yet deep strategy game that is enjoyable for beginners and veterans alike. Kudos to Moaideas Game Design for this great game and once again, special thanks to David Liu for sending us a copy!

Another Disclaimer: the author made this review by his own free will, without any external or even cosmic power influencing the author. Any views or preferences in this review are sole of the mind of the author and not because of the will of a powerful cosmic entity. All hail Yog-Sothoth! 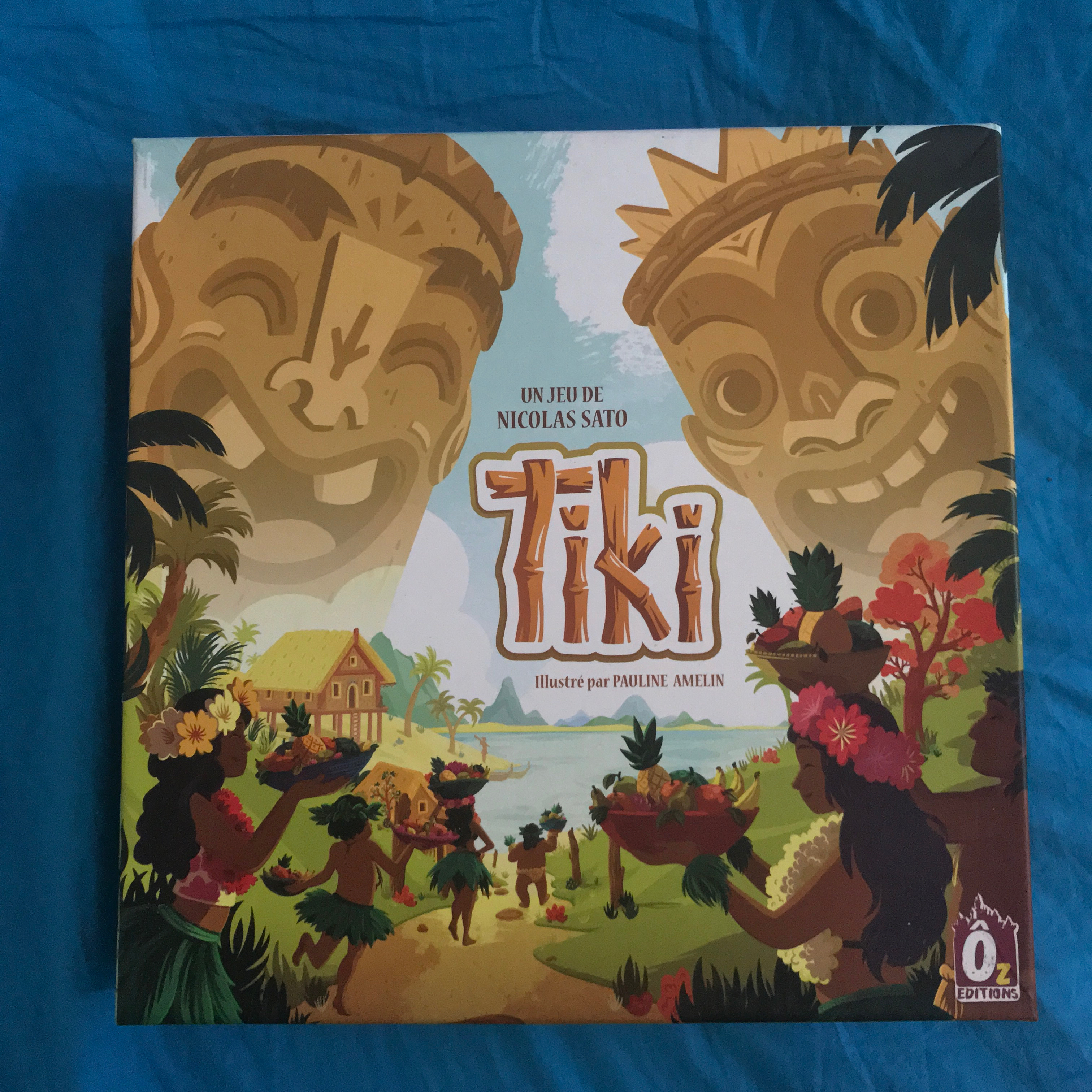 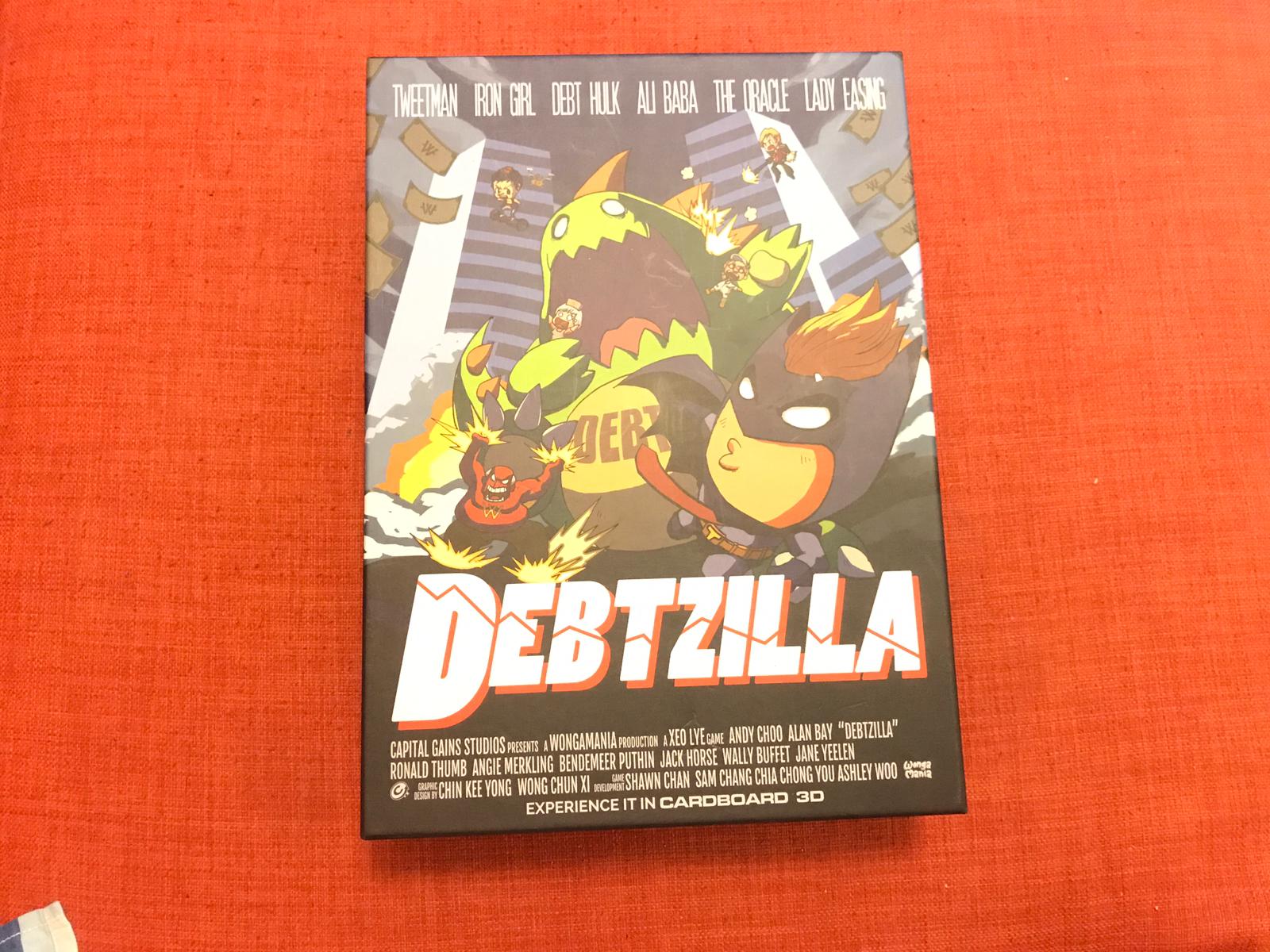 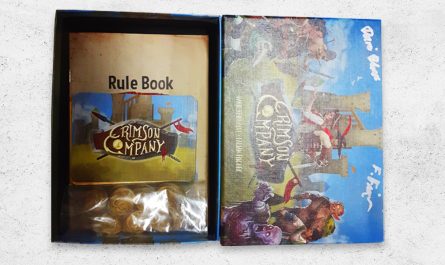