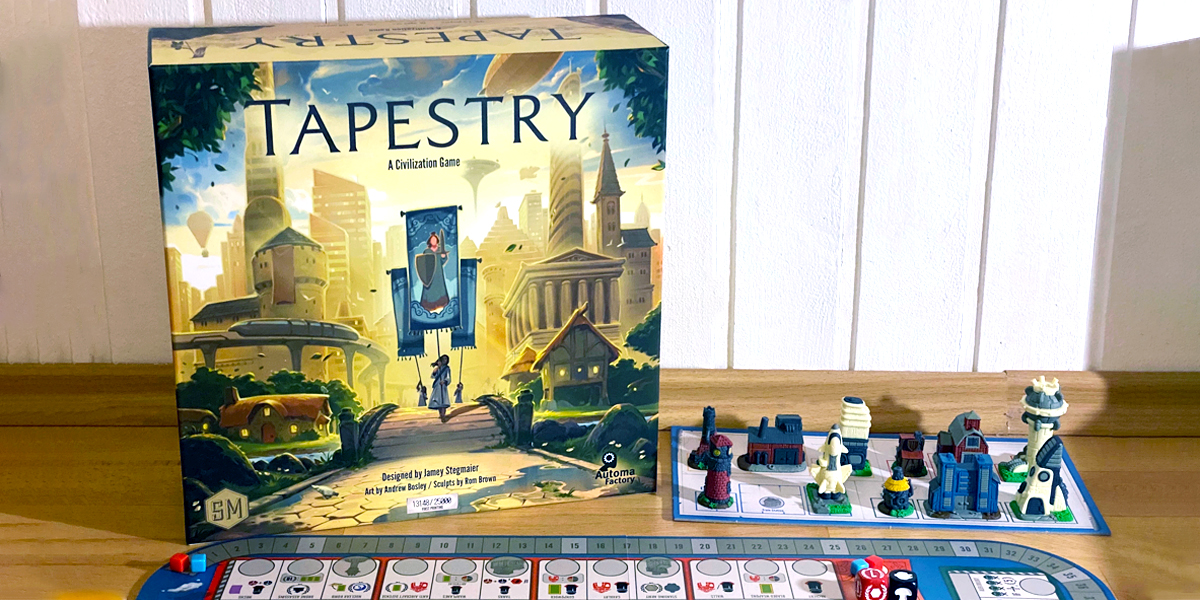 Tapestry is a civilization game, or so it was claimed and embossed on the box cover. This game was a huge hype when Stonemaier Games announced its preorder. The game is designed by James Stegmaier who was responsible for Scythe (and it’s one of my favourite game). You will tell the story of your civilization to the humankind through the tapestry cards.

In Tapestry, you will lead your unique civilization from scratch to the future, for the good or bad. You will advance four tracks (science, technology, military, and exploration) to progress. By doing so, you will earn resources and bonuses. You will gain Victory Points during the game and whoever gets the most points win the game. 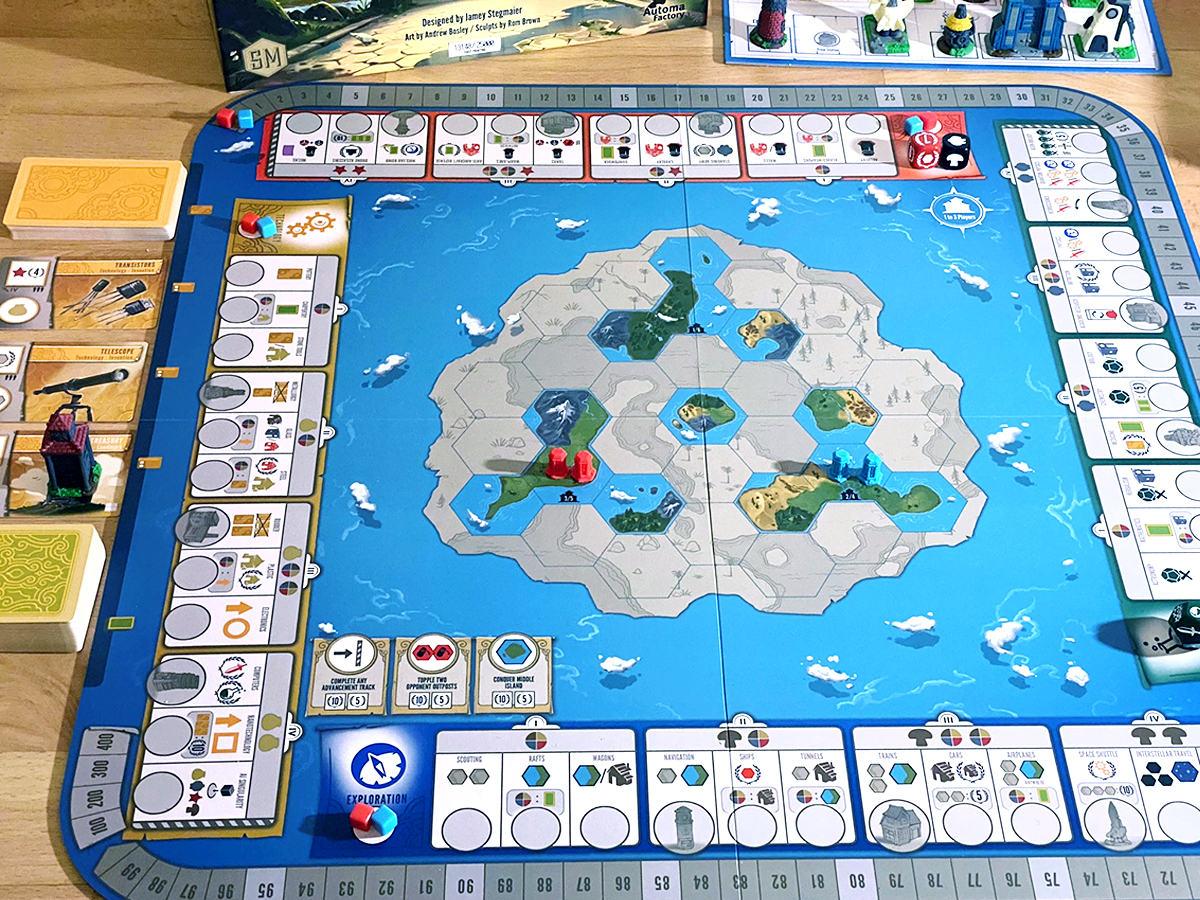 After setting up the game, ready to play

There are two phases in Tapestry: Income and Advance. Income phase always starts a new ear and it happens in a different period of each player; just like how civilization works. During this phase: you may activate civilization’s ability, then you must play a Tapestry card, and you may upgrade Tech card, and lastly, you gain income/resources based on the icons you control.

Most of the game, however, happens in the Advance phase.

In this phase, you will try to advance the four tracks in order to grow your civilization to be more superior than the other players’. By paying the cost, you can advance your marker on the track and gain effects/bonuses. The benefits from the advancement may enable you to get Landmarks to build on your capital city, getting more resources to spend on something else, drawing another Tapestry and Tech cards, exploring and expanding territories, and many other else.

The game ends when all players have finished their fifth Income phase. This may happen at different times for players.

My personal opinion on Tapestry

I cannot deny the prepainted miniatures are so pretty in this game. The details on the miniature really stand out I really wish Stonemaier Games would start producing a wargame with miniature really soon. Also, don’t forget how the artwork compliments the game. Aesthetically, Tapestry is top-notch. I think this is also one of the main reason why people buy the game instead of due to the gameplay Tapestry may offer.

The miniatures and the artwork on the cards and the playmats are the main reason I can justify the price of this game. 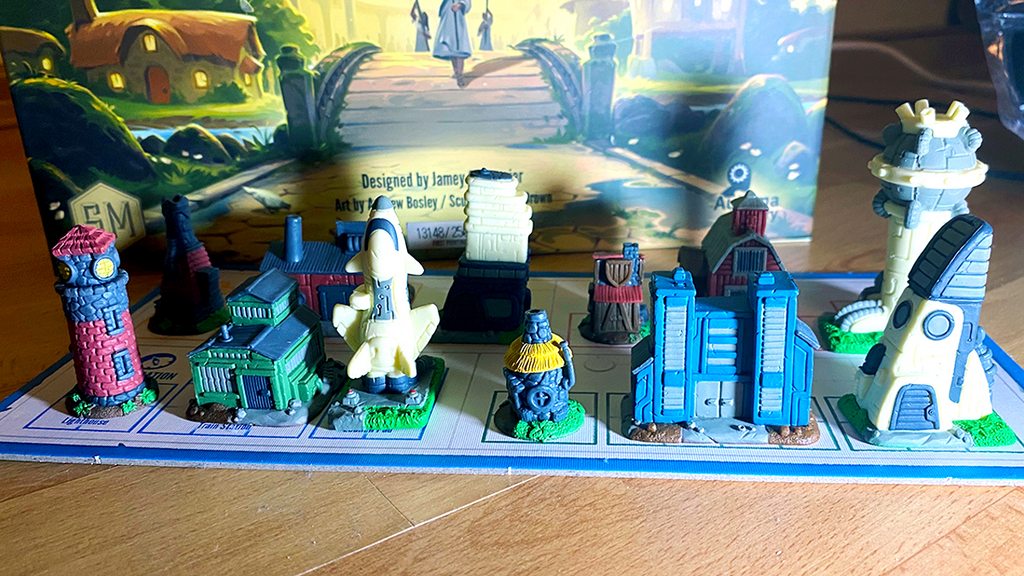 The devil’s in the detail. Look at that bricks that build the landmarks.

In overall, I would say Tapestry is a good game. You have strategy and resource management packed in this game. Not only the resources, but you also have to be clever enough to manage the cards in your hand! The game design is fine though I wouldn’t say magnificent. It is well-balanced but I still find some patches that can be more refined. By the time in the mid-game, you will feel that this game is actually more of an engine-building rather than a civilization game…

Tapestry is an easy game to learn; you read the book and you basically are ready to start the game. Most of the rulebook contents are illustrated, too. There are several references and player aids to help you to go through your first game. The information on the cards and the tracks are illustrated and it’s easy to understand. The game is pretty much language independent and I like it just like that.

Quick time for each turn

Most of the turns will be done in a swift fashion because all actions are straightforward. You either gain income or advance your player token along the track. When you choose to advance, you basically only pick the segment you want to advance, pay the cost (resources), and gain the benefits and bonus, if any.

The game ends at different paces among players. Some may finish earlier than the other because they race to get some benefits; some may still want to expand their civilization’s track and/or territory.

Specialization is a must

There are four tracks and if you want to win, you should focus only at maximum 2 tracks. Trying to advance all four tracks is a futile effort; not only it will cost you fortunes but it is a taxing feat to do. You will not get enough time to do that. 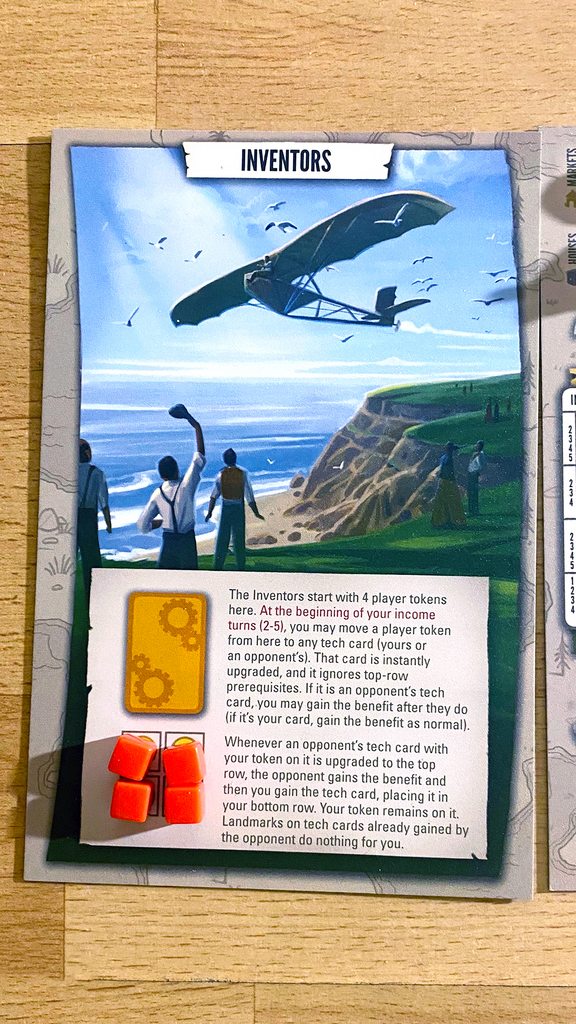 Expand and advance according to your civilization.

Hence, you should take into consideration which tracks really benefit your civilization the most. This is usually considered after you get your Civilization card. All of them have unique effects/skills and you have to devise your game plan accordingly.

Less interaction & combat than I thought 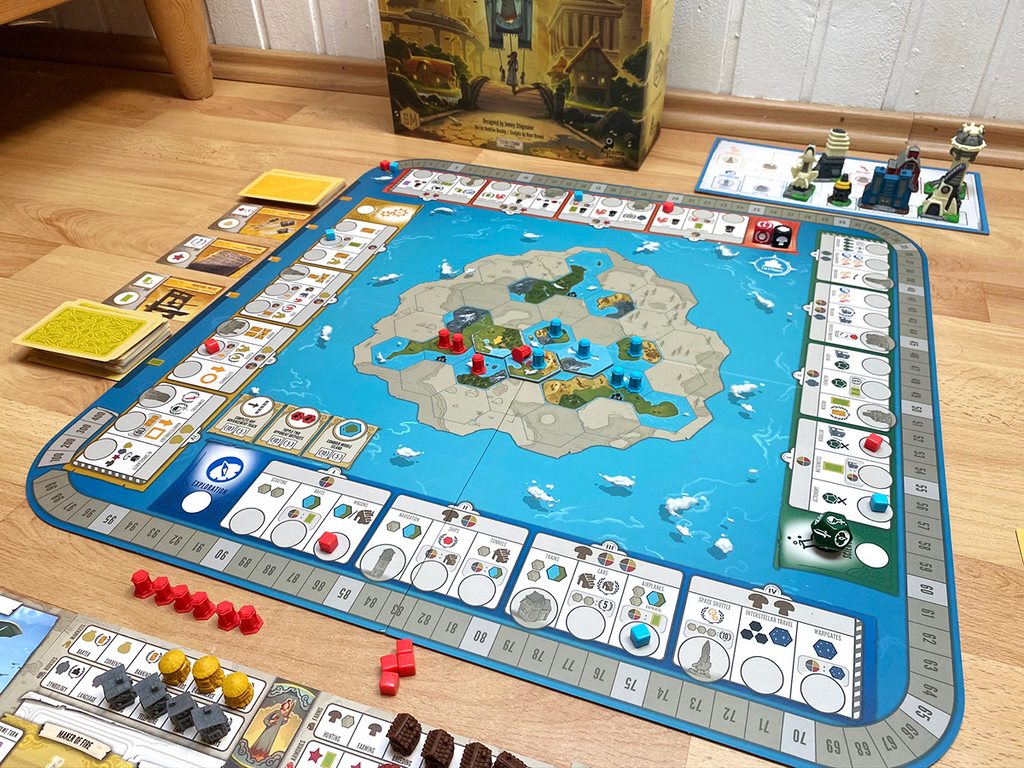 The state of the board after several rounds. As you see, the only combat we have was onyl during the territory expansion.

As a semi-zen board game, Tapestry does not have much direct interaction between players except for claiming landmarks and territories. Albeit the lack of interactive touch, we can still by any means sway the outcome of other opponents’ move when claiming some landmarks to fill our capital city. It does not strike lethal consequence per se. The scarce interaction is more noticeable when you play in a 2-player-game. 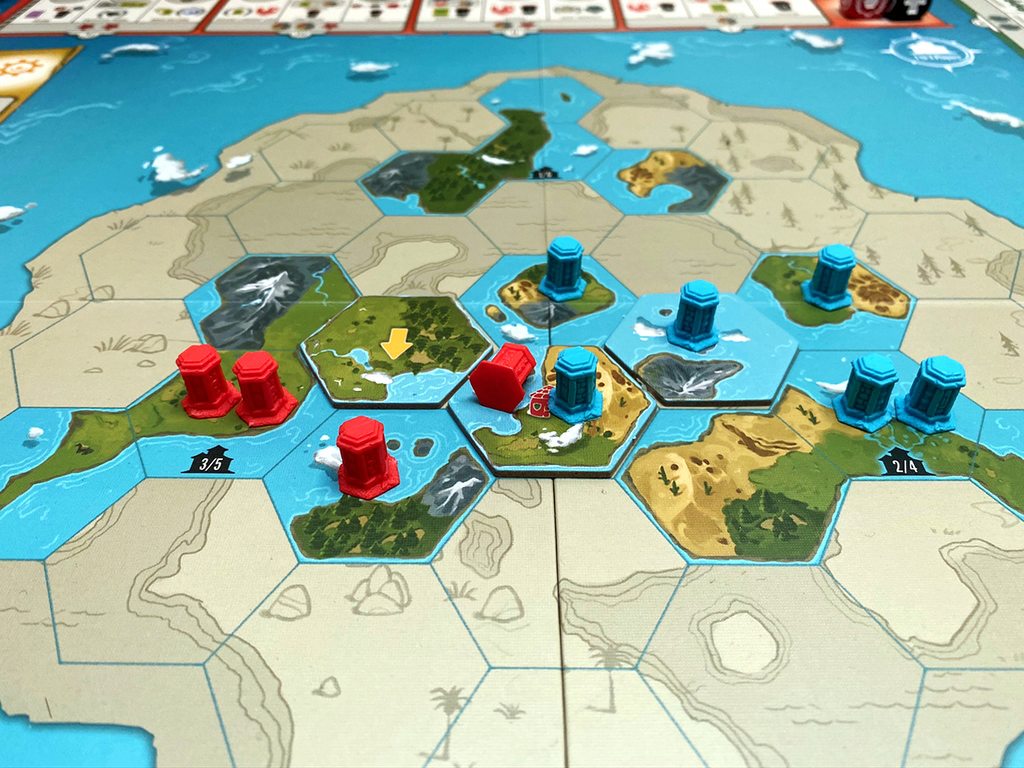 A two-player game and I could already feel there was not so much interactions between players.

Just like Jamey’s prior board game, Scythe, in Tapestry, you don’t have that much combat than you might anticipate. Sure you can beat and topple others’ territories but that’s the only conflict touch to entertain you.

Anyway, the only defensive move against this conquest attempt is the existence of several Trap cards (among the Tapestry cards) in your hand. You cannot cancel this Trap and thus the effort to conquer others’ territories must be done carefully; that makes territory disputes getting rarer to take place. 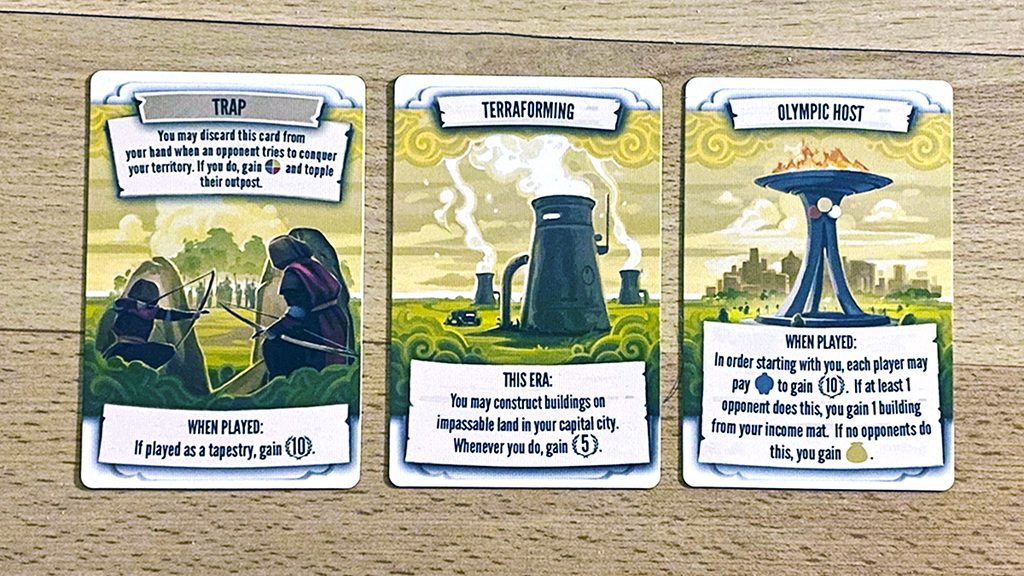 Some of the Tapestry cards; you can defend with the Trap (most left card).

Playing Tapestry with two players didn’t really leave a satisfying impression for me. Almost no combat and interaction. If you want to get the best experience in Tapestry, I recommend playing with 5 players.

Rewards from final advancements are underwhelming

I don’t know if it’s basically for the sake of the balance they decided to tune down the reward for the final advancement of each track but it is definitely disappointing. I can fancy something more fulfilling, though. Like, really, I just spent lots of resources to reach that finish line and I can get something better, right? 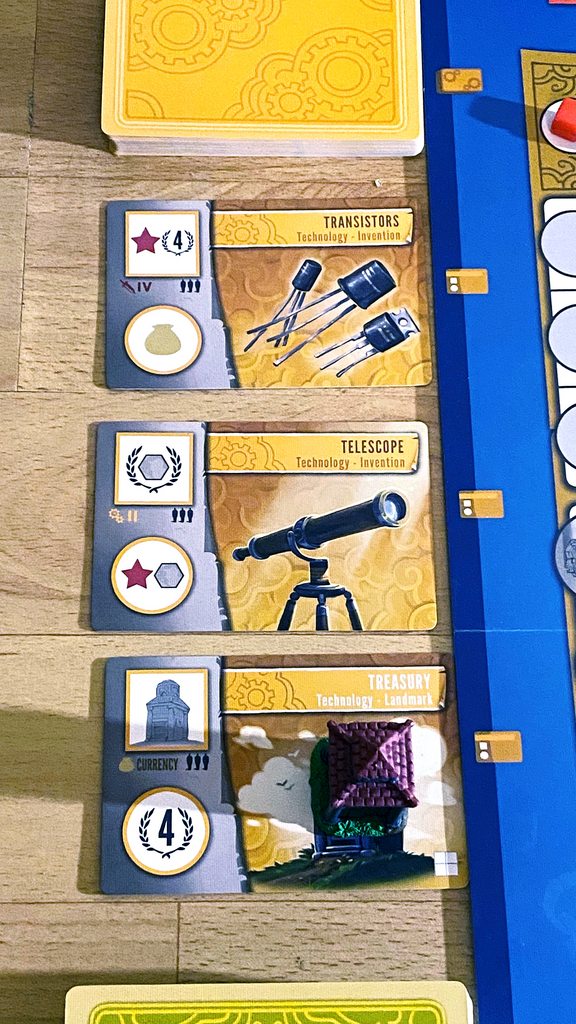 These are the Tech cards. Some landmarks are availabe through Tech cards.

Is this really a civilization game? Thematically, yes…

This game is definitely a euro game where it’s all about strategy, engine building, and resource management. You build your engines to get more resources in order to stay ‘alive’ and staying in the game longer than most of your opponents. I will not call Tapestry ‘a civilization game’, though; but it’s fair to mention that Jamey Stegmaier posits the civilization as the theme of the game but trust me, it’s pretty much just ‘cosmetic’ in this game. But we can agree to disagree on this regard of mine.

It’s quite hard to say this but yes, Tapestry is a good game; but considering how Stonemaier Games really hyped up the game and confidently printed ‘A Civilization Game’, it is pretty much disappointing me.

I was expecting something more, far better than how it came out. Perhaps it’s true that good is the new bad… Or don’t expect too much especially from a game which got overhyped before the actual release.

Don’t get me wrong, this game is a decent game, really. Tapestry is a simple game. Although it wouldn’t satisfy me, I think if you are a fan of prepainted miniature and into an easy-to-play, engine-building game, Tapestry might be suitable for you. At least even if you end up not liking the game, you still get the miniatures as the consolation prize. 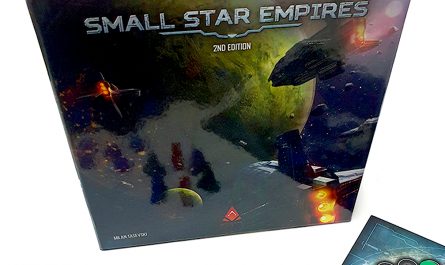 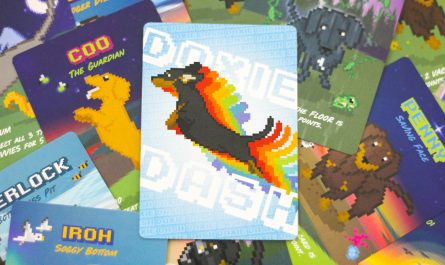 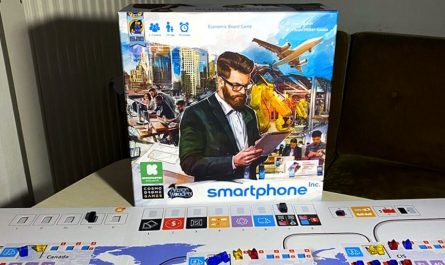 Smartphone Inc.: The next smartphone tycoon is… [Review]